How do you put a price on pursuing and catching a southern icon – the mighty West Aussie salmon?

For many that experience is simply priceless and they might question why you’d want to put a price on it in the first place.

The reality is for Government and people in power who make decisions about managing our fisheries, dollars really do talk.

And while traditionally, the dollar-value of commercial fisheries to the WA community has long been recorded and scrutinised by economists, this hasn’t been the case for recreational fisheries.

Last year the Economic Dimensions of Recreational Fishing in Western Australia report determined that, every year, WA recfishers spend $2.4 billion on fishing prompting the Premier himself to announce the results of the study at a high-profile event in Fremantle.

Having Premier Mark  McGowan front and centre recognising the importance of recreational fishing, gives us much more influence as a sector when advocating for your interests.

This is why the results of a similar study into the economic value of the recreational salmon fishery – funded through the Recreational Fishing Initiatives Fund – is so important to ensure the future of this awesome fishery is protected for the future.

And again, given the dollar value put on salmon recfishing, it was why the Premier and Fisheries Minister Peter Tinley felt it important enough to announce in Albany with Recfishwest and members of the local fishing community, including Western Angler editor and Sunday Times fishing columnist Scott Coghlan.

So how much is the recreational salmon fishery worth to the WA economy?

The study says $331 million is spent by West Aussies on recreational salmon fishing every year.

That’s a significant amount particularly given most of it spent in the South and South West, providing a major boost for the WA regional economy.

The study builds a picture of how the migrating schools of salmon bring with them a migration of recreational fishers.

These trips to the South and South West bring an influx of visitors who frequently explore the towns nestled along the coast spending money on fuel, bait, lures, fishing gear, food, drinks, accommodation, camping gear and clothing.

In fact, the study shows $251 million is spent locally at fishing destinations with $159 mill spent on local accommodation alone each season by the visiting salmon disciples. 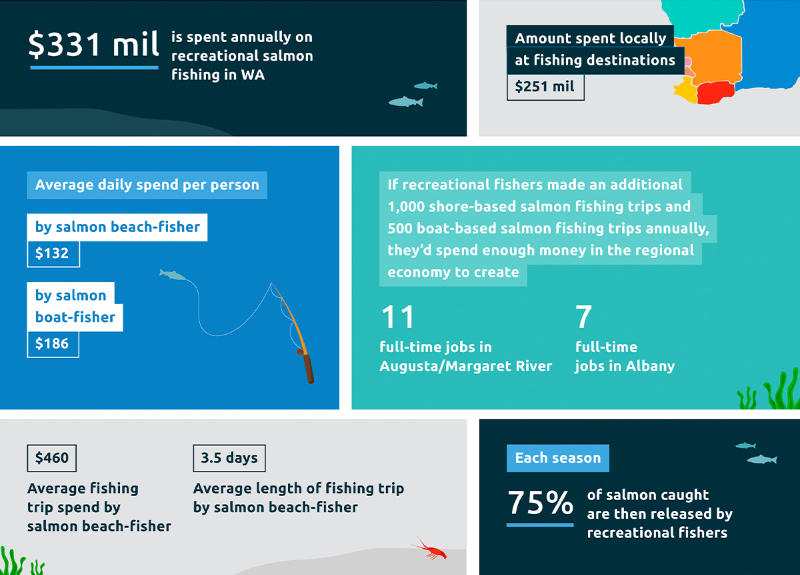 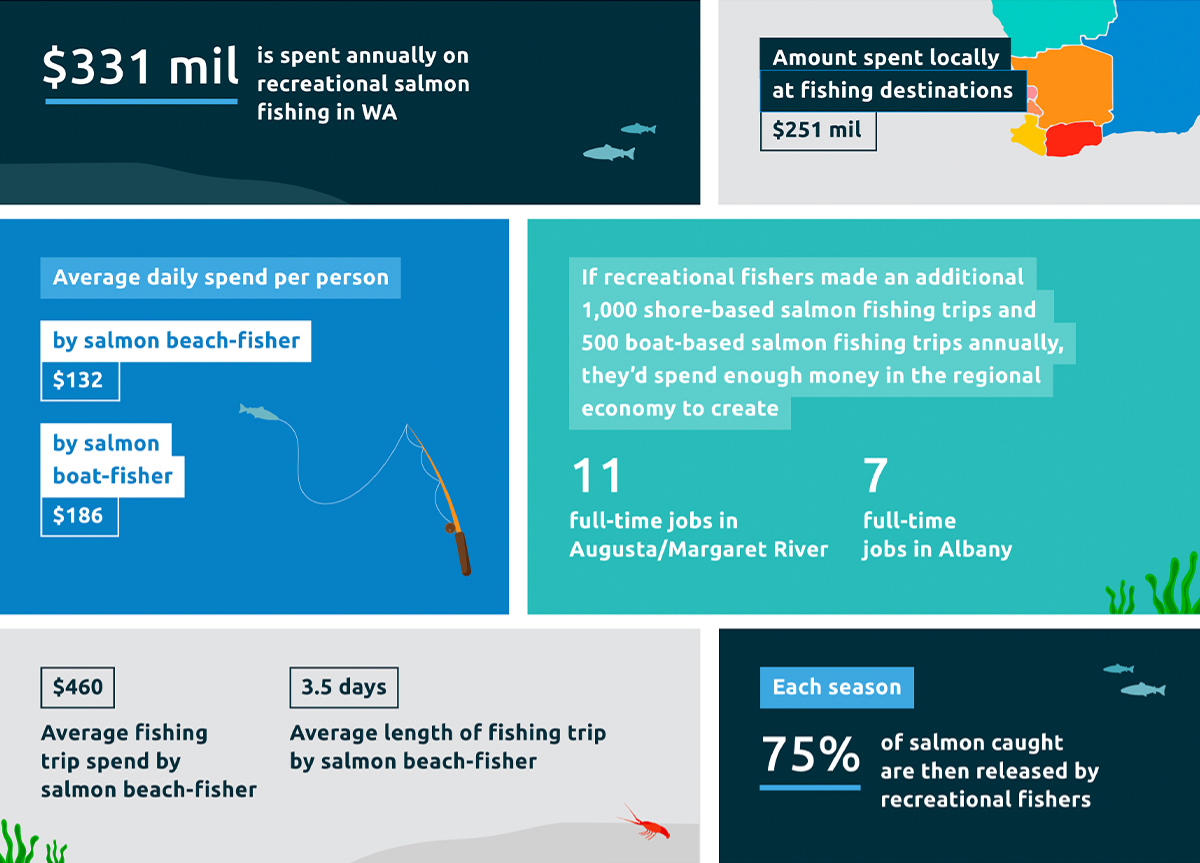 Another significant finding from the survey was that three out of four of the salmon caught by recreational fishers were released.

This perhaps reflects it’s for the sheer sport fishing qualities of the salmon that makes most fishers prepared to spend a fair whack of their hard-earned on fishing trips to battle with one.

Perhaps it’s because some are still unaware about the good eating qualities of fresh salmon if properly looked after post-capture and well prepared for the table.

Either way it shows that potentially each salmon represents even more value if recreationally caught – as many go back to fight and thus bring another angler to target them another day.

Clearly, salmon are highly valued by tens of thousands in the community who make the pilgrimage south each autumn – to the extent that on average the fishers surveyed spent a hefty $460 per salmon fishing trip.

It’s for these economic reasons and more  that we and others in the fishing community are celebrating this southern WA recfishing icon this autumn with the Awesome Autumn of Salmon – a series of great salmon fishing comps and events including our three-month Salmon Slam 2020 competition, the Albany Salmon Spectacular over the Easter long weekend (17-19 April) and our Great Southern Salmon Campout (27-29 March) at Cheynes beach.

So join in the fun and help celebrate these fantastic fish that bring so much to the WA community.