From marron to pink snapper off the State’s metropolitan coast, barramundi in the north and trout in the South West, Recfishwest supports many stocking and stock enhancement projects throughout WA.

There are many research providers around WA that we partner with, that do a great job in providing fish stocking projects to benefit the community, including the Department of Primary Industries and Regional Development (DPIRD) Fremantle-based Aquaculture Centre and Broome’s Aquaculture Centre at the Northern Regional TAFE.

DPIRD’s “Policy on Restocking and Stock Enhancement in Western Australia” underpins these efforts. Recfishwest was instrumental in the development of this policy.

Read the Policy on Restocking and Stock Enhancement in Western Australia here!

Cockburn Sound is a fishing jewel located on Perth’s doorstep, with WA’s recreational fishers and the broader Perth community over boasting a strong sense of stewardship over its waters.

From providing fantastic and accessible fishing experiences to offering nursery habitat for many species, Cockburn Sound is an important fishery on Perth’s doorstep for a raft of reasons.

The Sound is a vital habitat for juvenile pinkies – and other species such as squid and blue swimmer crabs – and hosts the West Coast Bioregion’s only-known pink snapper spawning aggregations.

And, for Perth’s passionate recfishing community, Cockburn Sound is a place that simply must be protected

Snapper Guardians, supported by Recfishwest’s partner Shimano Australia, was founded in the wake of the devastating and widespread fish kill at Cockburn Sound in 2015.

Since then, the community-driven fish stocking event has grown into a must-keep date in the diary, with hundreds of families taking part each year to release thousands of pinkies into the Sound.

The pinkies are hatched and reared at Department of Primary Industries and Regional Development (DPIRD) aquaculture facility in Fremantle.

WATCH: All the action from the 2020 Snapper Guardians

A three-year commitment to stocking kingies is part of the State Government’s COVID-19 fishing package announced by Premier Mark McGowan in August, 2020.

All juvenile fish released through this program have their otoliths (ear bones) stained with special dyes to allow captured fish to be traced years later.

Recfishwest joined staff from the Marine Finfish Hatchery – Fremantle, who cultured the kingfish, in November 2020 to release 10,000 more kingies from South Mole.

Barramundi across the Kimberley

Barramundi are one of the most iconic sportfish in Australia. Caught in both salt and freshwater, people travel from around the world to catch the 1m Holy Grail!

Since 2013, the trailblazing Lake Kununurra fish stocking program has stocked barramundi into the Kimberley waterway.

From small things, mighty things grow and with the holy grail of 1m-long barra regularly being caught and 120cm fish not a rarity.

A collaborative effort among the Lake Kununurra Barramundi Stocking Program, North Regional TAFE and DPIRD, the program continues to go from strength-to-strength.

With the one millionth barra stocked into Lake Kununurra on 18 July, 2021, the fishery is rapidly establishing itself as a world-class fishing destination and a ‘must-go-to’ on recfishers’ hit-lists. Read more about the program here.

WATCH: As the ONE MILLIONTH barra is released into the Lake!

All of the barra released into Lake Kununurra are breed at North Regional TAFE’s Broome Aquaculture Centre.

The Broome Aquaculture Centre will play an important part in fulfilling part of the recreational fishing COVID recovery package.

Stocking of barramundi in waters near Broome has also occurred since 2013, with thousands of fish released at both Crab Creek and Willie Creek.

Tagging these fish allows the Broome Aquaculture Centre to track how these fish are going with local fishers reporting recaptures of stocked fish.

To-date, there has been enough recaptures to deem that stocking program a success.

The exciting marron stocking program, launched with Premier Mark McGowan in 2019, will see 300,000 marron released into South West freshwater waterways over three years from 2021 to 2023.

With marron stocked into accessible dams near towns such as Waroona and Harvey less than two hours’ drive from Perth, it is a great program for WA’s 10,000 fishers who hold marron licences.

Marron are a South West icon, providing a unique and family-friendly fishing experience.

However, declining annual rainfall across the South West and south coast is placing environmental pressure on freshwater species in the State’s south, including marron populations.

All of the already released marron and to-be-released specimens are bred at Aquafarms’ aquaculture hatchery in Capel, where they are nurtured through the most vulnerable stage of their lifecycle.

Freshwater trout in the South West

Keep up-to-date with the latest Troutfest at Drakesbrook Weir here.

Recfishwest, through its Freshwater Fisheries Reference Group, offers advice to DPIRD on where to stock each year’s stock of bred trout in the South West.

Want to see the trout stocking locations? Find them via this link.

WATCH: A tremendous time at Troutfest 2020

More than 20,000 mulloway have been released as part of a project focused on restoring mulloway stocks in the Mid West and throughout the lower west coast of WA. 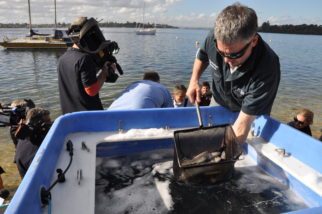 It provides an opportunity to better understand the species’ movement patterns. Recreational fishers have collected mulloway fin clip samples from along the west coast to determine genetic distribution of the species.

ACAAR (Australian Centre for Applied aquaculture Research), can culture juvenile mulloway from captured broodstock, refining culture techniques for the species, developing marking methods to be able to identify the cultured fish, and releasing them into locations favourable to their survival. The project is managed by the WA Fish Foundation.

Prawning was once a popular Perth pastime, with hundreds of families spending balmy summer nights on the Swan and Canning rivers. In recent years anecdotal evidence has suggested a significant decline in prawn stocks.

Funding generated from recreational fishing licence revenue seeks to turn back the clock. The decline in prawn numbers over the last decade has highlighted the need to protect and restore our important estuaries and catchment areas.

This program will be backed by solid research which will help scientists understand the status of prawn populations, and has currently seen more than 4.5 million prawns put back into the Swan River. The project is being managed by the West Australian Fish Foundation, an organisation focused on fish stocking and stock enhancement following best practice principles. Other project partners include the Swan River Trust and ACAAR (Australian Centre for Applied aquaculture Research). 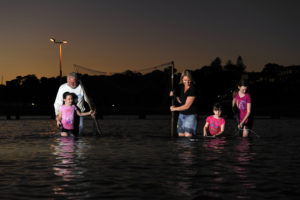 The release was made possible following a scientific breakthrough in 2013 which saw a world-first achieved with the development of techniques to culture river prawns in ACAAR’s Fremantle laboratory.

Murdoch University is still monitoring prawns in the river to try and determine the factors inhibiting their natural recruitment.

This project was made possible by the Swan River Trust, Challenger Institute of Technology and the Recreational Fishing Initiatives Fund and is supported by Recfishwest and the Department of Primary Industries and Regional Development. 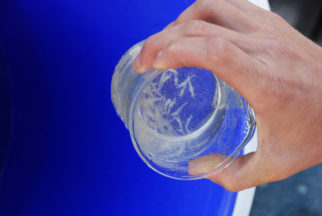 You can read more about prawn stocking here.