Recfishwest always love an opportunity to connect with the fishing community, and on December 8 we were invited to be part of the Lancelin Angling and Aquatic Club’s first Boat ‘N’ Trailer Day at their Lancelin clubrooms. 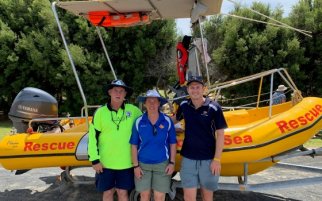 The idea of the event was to bring fishers in with their boats and help them keep on top of their trailer, boat and engine maintenance ahead of the coming summer/autumn fishing season. 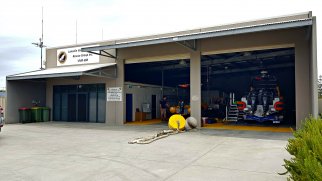 There was a circuit set up for all the boats and their trailers to be able to cycle through and have their boat inspected by professionals from Big Five Marine who knew what to look for. One lucky boater even had his wheel bearings repacked as part of a demonstration!

It was a great opportunity to have a yarn with all the local fishers who came through the event and it was great to hear they were all very happy with their local fishing opportunities, with many out the morning before pulling pots and bring home a great feed of crays. 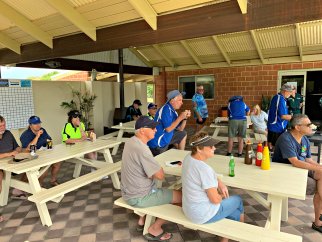 The event was also attended by St John WA – Lancelin, the Volunteer Fire Brigade and the passionate Lancelin Volunteer Marine Rescue Western Australia team. This allowed fishers to meet the kind and energetic emergency service people that have their back if something ever goes wrong out on the water, or even on their way to and from the ramp. 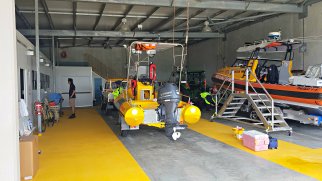 We were also privileged to be shown around the VMR’s new premises after the event and it was inspiring to hear about all the businesses and companies that had rolled up their sleeves and pitched in to help build their new shed and office. We chatted to the vollies about their recent rescue efforts and their beloved vessels they keep in premium condition between rescues. The event shows the Lancelin fishing community is in great shape. Their upcoming John Bray Classic on 27 December is another popular community event and has had over 140 children attend in previous years. It was heartening to see the community coming together to help keep everyone safe, maintain their gear and meet the enthusiastic crews that will be there if all else fails.

Check out the club’s website here to see all the upcoming events and competitions here – http://www.laac.org.au/

It was great catching up with hundreds of passionate fishers who took the time to speak to at this year’s Perth boat show. END_OF_DOCUMENT_TOKEN_TO_BE_REPLACED

There’s no more iconic fish in West Australia than a Dhufish. This fishing favourite has long been a part of West Australian culture as far back as can be remembered and in 2009 when sustainability concerns were first raised, WA fishos graciously accepted the introduction of a Dhufish boat limit, reduced bag limit and a two month closure in the West Coast Bioregion as part of efforts to reduce catches by 5o%.

At the time it was unknown if these management changes would be enough to reduce catches by 50% which was the amount deemed necessary by researchers in order to adequately protect Dhufish stocks and allow this favourite fish to recover. Since the boat limit and other management changes were introduced, catches of Dhuies have remained stable and have exceeded the sustainability target by reducing our catch by 62%. This indicates the initial 2009 management arrangements may have been set a little too high. On that basis and combined with the overwhelming community view that the boat limit of two Dhufish is inequitable for those fishing in larger groups, Recfishwest believes there is scope to increase the Dhufish boat limit in line with Dhufish recovery and the sustainability targets that have been set by Department of Fisheries researchers.

It took a few years, but in 2013 the Dhufish stocks were showing the first signs of recovery and fishers were seeing lots of smaller Dhufish indicating increased recruitment in the fishery. Fishers are pleased to see tangible results from their efforts to reduce catches. Many fishers have actively promoted the positive effects on fish stocks these management changes have had, demonstrating the high level of stewardship for this resource.

A stock assessment in 2013 confirmed some recovery of Dhufish stocks and following this report Recfishwest requested the Department of Fisheries investigate what effect increasing the boat limit would have on Dhufish stocks and target catch levels. The Department decided not to review the boat limit for Dhufish at the time, preferring to obtain more data on Dhufish from the boat ramp surveys and future stock assessments.

A study of recreational boat fishing catches released in 2015 provided Recfishwest with the confidence that our original request in 2013 was sustainable and that a change to the boat limit would not negatively impact Dhufish stocks. Once again we sought a commitment from the Department of Fisheries to investigate the effect of changes to the boat limit of Dhufish. The Department of Fisheries once again preferred to await more information.

Recfishwest is proud to announce the Department of Fisheries has now agreed to review Recfishwest’s request when information from the latest stock assessment for Dhufish becomes available later this year.

Of course, any decisions must be based on sound science using the best information available with sustainability at the forefront. Recfishwest are comfortable that an increase in the boat limit of Dhufish would still see our sectors catch remain below the level needed to ensure the continued recovery of this iconic species. This change, however, would greatly improve fishing experiences on those rare times when there are more than two fishers on board and you are all lucky enough to hook onto a Dhufish.

Recfishwest believes any increase in the number of Dhufish retained as a result of increases to the Dhufish Boat limit will have a minimum biological impact on stocks and provide a major positive impact on recreational fishing amenity. Any increase in catches will remain below the level required to ensure the sustainable recovery of Dhufish.

It’s important to remember that not all of us are lucky enough to catch multiple Dhufish every time we go fishing, but for this special occasion, we believe a group of three should each be able to take a Dhufish home to their family.

We are confident the next stock assessment will reflect the recovery that fishos have been seeing since 2013 and are hopeful management arrangements can be amended to allow an increase in the boat limit of Dhufish before the end of the West Coast Demersal Closure on December 15 this year allowing more West Aussies to enjoy a Dhufish for Christmas!