Department of Health is reminding people that the warning associated with persisting toxic Alexandrium algal in the Swan and Canning Rivers remains in effect.

Fish, crabs or shellfish collected from within the following waterways should not be eaten due to the potential for unsafe levels of paralytic shellfish toxins:

NOTE: Despite Department of Health signs stating “NO FISHING”, there is no reason why you can’t continue to catch and release fish without any risk to your health in the affected areas.

A map of the impacted area can be viewed below: 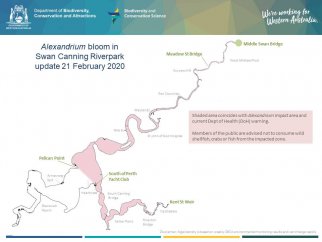 Department of Biodiversity, Conservation and Attractions continues to conduct weekly water quality monitoring at an increased number of sites to track the extent of the bloom.

Mussels, crabs and fish are also being tested for the Alexandrium toxin. DoH and local riverfront councils have arranged for health warning signs advising against eating shellfish, crabs and fish to be erected at key riverfront locations including jetties, boat ramps and key accessible foreshore areas within the affected region.

It should be noted that swimming and other aquatic recreational activities on the Swan and Canning rivers are not impacted by the algal bloom, but as a general rule swimming should be avoided in areas of discoloured water.