It goes without saying Exmouth is an iconic Australian location and is a popular destination for boating, diving, fishing and snorkelling. 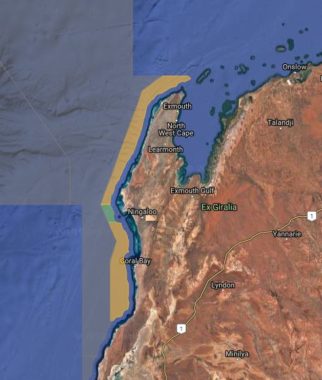 Within the Ningaloo Marine Park, a diverse array of species are on offer for visitors and locals to swim with, see and catch including a variety of cod species, emperor, sea perch, and a large number of pelagic fish such as trevally, tuna, marlin and mackerel.

For the rec fisher, it is unlike any other fishing location in Australia, offering hours of family entertainment, experiences you won’t forget and fish stories to fill endless number of talks around the camp fire. However for our spearfishing community large parts of this coastline are off limits due to rules and regulations regarding the Marine Park zoning.

Recfishwest believes spearfishers should share equivalent rights of access as those enjoyed by other fishing forms.  When the latest Commonwealth Marine Park Plans came into effect on July 1st this year, we move a large step closer to this equality.

Spearfishers can now immerse themselves in the crystal clear blue water of the Commonwealth portion of the Ningaloo Marine Park and experience the unique fishing on offer thanks to an update in Marine Park Zoning, granting access for spear fishing in the Recreational Use Zone.

‘’This is a win for the spearfishing community who now have the same access as other recreational fishers. It just makes sense for this to be applicable for all rec fishers.

Marine Parks were created to not only protect important marine habitats and species, but also ensuring people in the community can access and enjoy these areas,’’ Recfishwest Fishing Development Officer, Matt Gillett.

Recfishwest will continue to seek equity for spearfishing in other parts of WA which remains out of bounds to spearos.  We will keep you up to date on this matter as information comes to hand.

To read more about the Ningaloo Marine Park and see the updated map, visit Parks Australia.

Recfishwest, the fishing community and our stakeholders have worked hard for years on Marine Park equity for all and we believe the current plans provide just that.

The current plans were developed using best available science with considerable input from all user groups.

The value of recreational fishing has been recognised in the current plan, which is a good balance between community fishing access and the environment!

The recreational fishing community are champions of the aquatic environment – we too support plastic free oceans and healthy fish stocks.

We would welcome any assistance Mr Forrest could provide to help recreational fishers continue deliver these positive outcomes for the marine environment.

Recfishwest support marine parks that are created for the purpose of recreation, science, education, conservation and enhanced visitor experiences. We believe marine park zoning must be underpinned by science and should be implemented using simple, practical management that is risk-based, transparent and subject to regular review.

To read more about our position about Marine Parks, visit: https://recfishwest.org.au/news/new-commonwealth-marine-parks-announced/