In an Australian first, hundreds of West Australian recreational fishers will be asked to take part in a trial to restore the lost seagrass meadows of Cockburn Sound.

A community information session will be held at the Cockburn Power Boats Club at Woodman Point on 3 October for people to come down and learn a bit more about this trial.

Cockburn Sound has lost some 80 per cent of its seagrass habitat since the 1960s, down from 4000ha originally, to 900ha today.

Cockburn Sound’s seagrass meadows are critical foraging and nursery grounds for pink snapper and plenty of other important species such as blue swimmer crabs, King George whiting and squid.

OzFish Unlimited is leading the trial, with support from Recfishwest and researchers from the University of Western Australia, along with BCF.

A baron sandy floor with little seagrass coverage; a great reason to have a go and see if the trial works!

This sense of caring deeply about Cockburn Sound sees the fishing community wanting to trial something out of the ordinary in an effort to restore lost fish habitat.

Recfishwest and Ozfish are hosting a community information session at the Cockburn Power Boats Club. Come and learn more about the project and how you can be involved. 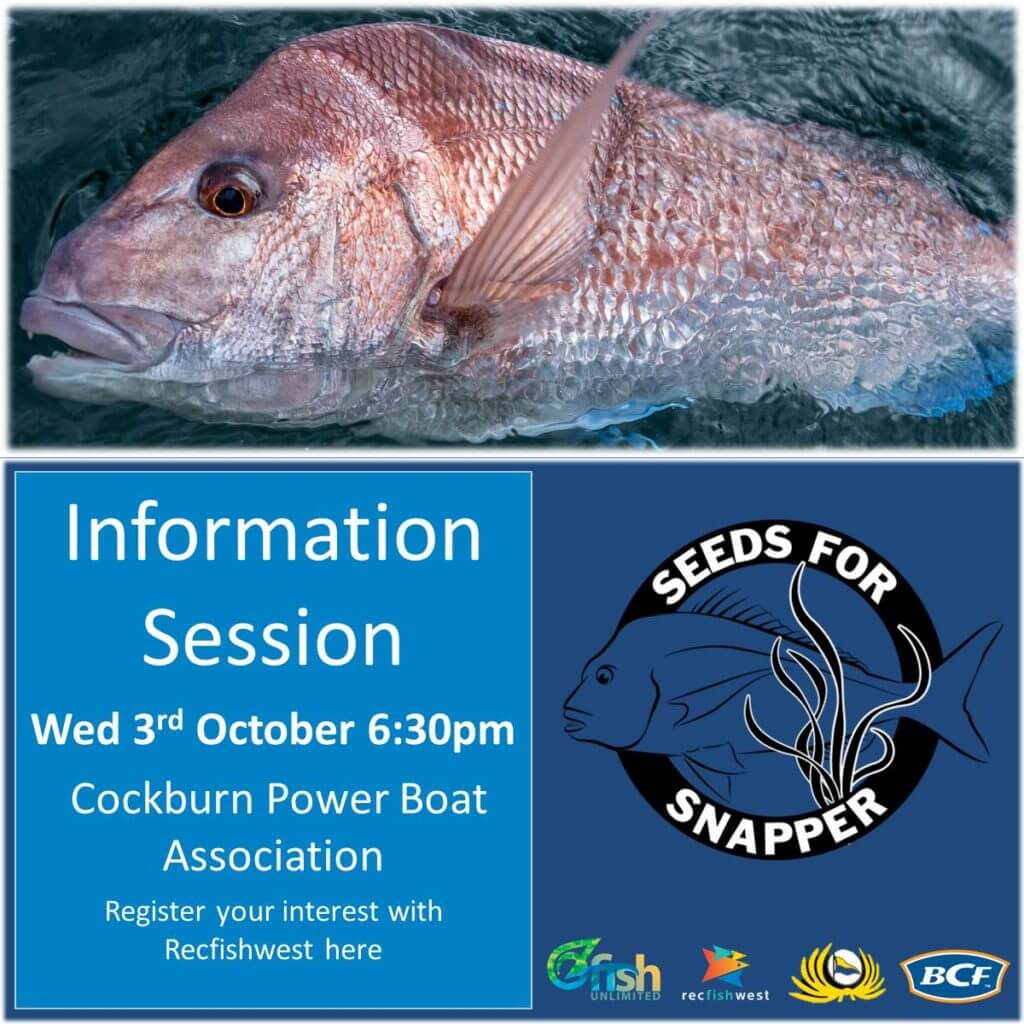 WA’s pink snapper fishery has been part of the cultural fabric for generations, with fishers across the state delighting in catching pinkies.

However, in recent years, the pink snapper fishery has seen management changes across the State due to fishing pressures, environmental changes and seagrass habitat degradation.

Cockburn Sound’s seagrass meadows are well-recognised as critical foraging and nursery grounds for pink snapper. Yet, Cockburn Sound has lost about 8o per cent of its seagrass habitat since the 1960s, down from 4000ha originally, to 900ha today.

That’s equivalent to 2,600 football field-sized areas of seagrass habitat lost over the past few decades! Pink snapper are not the only important species impacted by the seagrass loss – squid, garfish and blue swimmer crabs are also impeded.

Appreciation of the role seagrass meadows play in providing great fishing opportunities is growing in WA due to increased understanding of the critical link between our seagrass habitats and coastal fisheries.

People may have already seen the racks of flower pods collected by currents floating on the water’s surface. These will be collected and taken to UWA for treatment to separate the seed from the flower pods.

OzFish Unlimited have partnered with Recfishwest and UWA to support this citizen science restoration program’s plan to use volunteer fishers to release one  million seagrass seeds to scale up seagrass restoration.

The seed will be given to fishers to take back out and sown into an area identified north of Woodman Point.  Evaluating the performance of the re-seeded meadows as they develop will also be measured by this project.

An overarching aim of this restoration program is to ensure there is full engagement with the recreational fishing community across the different elements of seed-based seagrass restoration and the outcomes of their re-seeding program to foster community support.