The latest scientific stock assessment by DPIRD for the west coast demersal scalefish ‘resource’ (fishery) prompted the Minister for Fisheries Don Punch to announce new measures will be developed to reduce the total fishing mortality limit by 50 per cent.

This is to ensure that stocks can recover by 2030, as we are currently halfway through a 20-year recovery plan that began in 2010.

Because recreational fishers care deeply about these highly valued species and the fishing they provide, it is understandable many of you have questions about the science sitting behind the latest stock assessment.

We provide our perspective on  some of these questions below. We hope they help add to your understanding of the situation and inform some of your responses to our survey asking for your views on how we can help the stocks get back on track.

Feel free to contact us if you have any other questions on the science or anything else to do with west coast demersals.

Answer: The science has shown the recovery of some our favourite fish in the West Coast Bioregion is not tracking as well as hoped or expected.

While the decline of demersal fish stocks has been halted – which is definitely a good thing – unfortunately, recovery is not happening as quickly as we had hoped. While dhufish are recovering faster than pink snapper both species are unlikely to meet the original 2030 recovery timeframe. The assessment suggests that the initial catch reductions introduced for the recreational and commercial fishing sector 10 years ago were not enough and there is now a need for additional action to ensure fish stocks reach the target level by 2030. 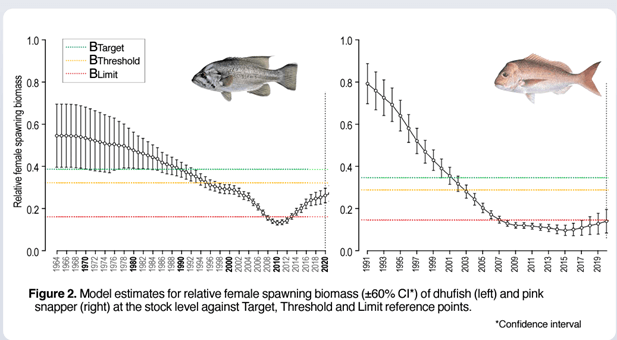 Q. If the stocks aren’t recovering quick enough, how come I’m still catching plenty of dhuies and pinkies where I fish?

Answer: This is a complicated fishery – it is a multi-species, multi-sector, multi-method fishery spanning nearly 1,000km of coastline from north of Kalbarri down to Augusta. The stock assessment has shown that for some species in some areas there are strong signs of recovery, whereas in other parts of the fishery there are little or no signs of recovery.

For example, the graphs based on the stock assessment results below show that dhufish ‘spawning biomass’ – numbers of fish mature enough to reproduce – have been recovering in the Metro and South West in line with the original 20-year recovery plan, while dhufish stocks in the North (Kalbarri/Mid-West) area have shown little signs of recovery over the last 10 years. 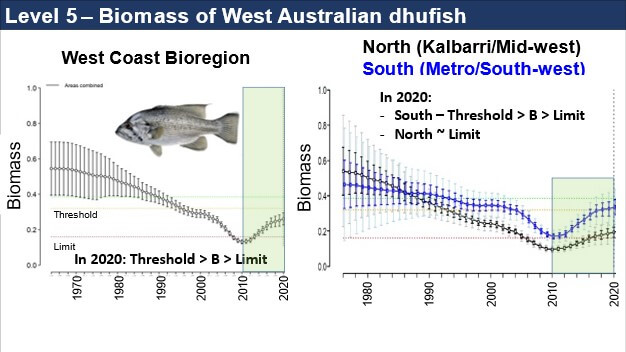 The picture is not so good for pink snapper with limited recovery in the Metro and South West and next to none in the North.  The state of snapper stocks in the Kalbarri/Mid-west are a serious concern. 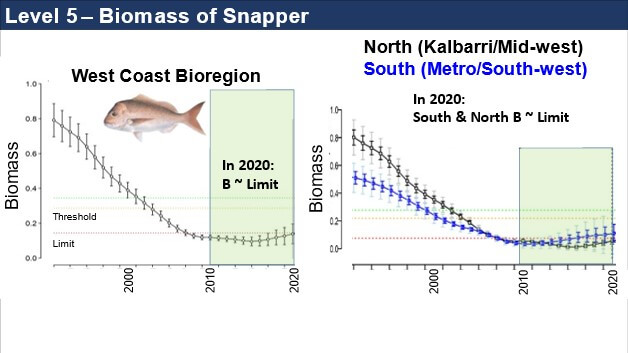 In addition, there appears to be few older pink snapper or dhufish in the stocks – this is also a cause for concern as the older fish are the more productive ‘big breeders’ who produce millions of eggs   and have many years to contribute to spawning activities. The longer these fish stay in the fishery, the more times they are able to reproduce and the greater role they play in helping fish stocks recover.

Answer A further complicating factor here is that bigger fish aren’t automatically older fish. Scientific studies have shown that growth rates of fish plateau at a relatively early age with growth rates slowing as the fish gets older. This is particularly the case for demersal scalefish which are slow-growing and long lived. So, depending on the environmental conditions, a 15-year-old dhuie or pinkie could be the same size as a 30 to 40-year-old one. So just because you might still be catching bigger fish, it doesn’t mean they’re the older more productive fish that we want in our fish populations. 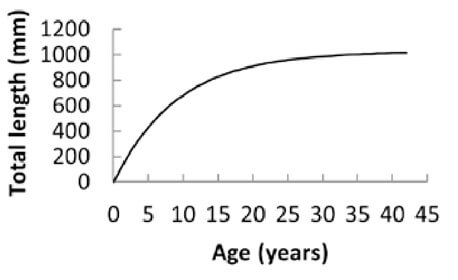 Q. Me and my mates have also been catching heaps of small undersize pinkies in the last few years – surely that’s a good sign of recovery?

Answer: Yes, absolutely, there needs to be healthy young fish to sustain a fish population. However, it’s important to be aware that fish, have what’s called ‘variable recruitment’ – which means the number of eggs that survive to become adult fish changes every year. Every few years when the conditions are just right a lot of eggs survive and many fish recruit to the fishery as mature fish. These fish then need to underpin catches until the next year of good recruitment occurs. So, while there might be a lot of fish from a particular year class being caught, there might be not much coming through after those strong ‘recruitment pulses.’ 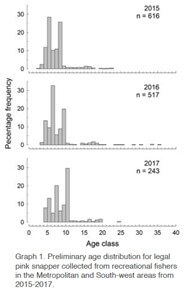 A lot of fish being caught from a single year class is not a sign of a healthy fish stock and in 2014 it was estimated 40% of snapper catches in the metro and South West came from a single strong recruitment pulse that occurred in 2007. Here are some graphs showing the age distribution (number of fish at specific ages) of pink snapper samples collected by DPIRD. You can see that there are two very well-represented age classes of pink snapper being caught (2007 and 2010 recruitment pulses), but not much either side of it. The problem is once those year classes get fished down there will be fewer fish coming through to take their place. So, while seeing lots of smaller fish is a positive sign, we still need those fish to survive and turn into older fish that can spawn for several years.

Answer: No-one is to blame, for the past 11 years all fishers have done their part to help demersal fish stocks on the west coast recover and we have all followed the rules doing what has been asked of us. Since 2010, the total catches of demersal fish have remained below the 750t benchmark set in 2010 which was designed to recover stocks over a 20-year period. The latest stock assessment has unfortunately shown fish stocks are not recovering as fast as we had hoped, and it is clear we need to do more to ensure stocks recover by 2030. The Minister has announced total fishing mortality will be reduced by a further 50 per cent to 375t. Good management suggests management action should be focused on the species and areas where the stock recovery is struggling the most.

The west coast demersal scalefish fishery is a shared fishery used by both recreational, charter and commercial fishers. While each sector currently catches varying proportions of each species, the total catches of demersal fish in the west coast by commercial and recreational fishers is roughly equal. It will take a combined effort from all fishers to meet the Minister’s new catch target and, while there may be some management measures to reduce catches that can be applied across all sectors, there is also likely to be measures that can only be applied to one sector. The important thing is the combined effect of all management measures needs to reduce catches to 375t. 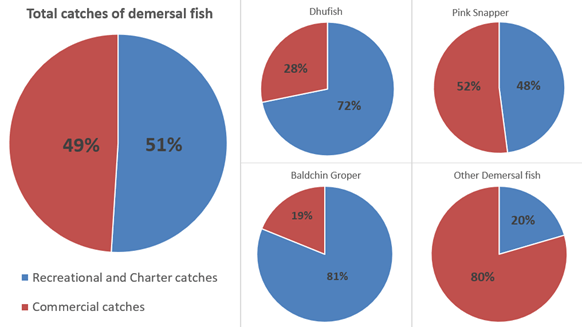 Q: I keep hearing the term ‘post-release mortality’ talked about in relation to the west coast demersal scalefish fishery. What does this mean and why is it important?

Answer: The benchmarks outlined in the recovery plan for this fishery outline how many fish can be taken. This figure includes the number of fish that are taken home plus the number of fish that do not survive once released. Fish are released for a variety of reasons including being undersized, over the bag limit, too small, protected or simply unwanted. Many of the fish that are released do not survive either due to physical injury and stress or being eaten by sharks. All these fish are included in the total allowable catch limits.

Post-release mortality may occur after a fish species has been released and can be caused by stress and/or physical injury which may have occurred during capture or handling, as well as fish being eaten by sharks while hooked or soon after release. One of the major causes of post-release mortality is the physical injuries which can result through barotrauma, with certain demersal finish species being more susceptible to the effects of barotrauma than others.

Barotrauma occurs when a fish is brought up from deep water, the rapid change in pressure causes gases within the fish’s body to expand. The effects of barotrauma have been shown to increase with water depth, leading to a much higher chance of released fish experiencing post-release mortality from deeper waters. 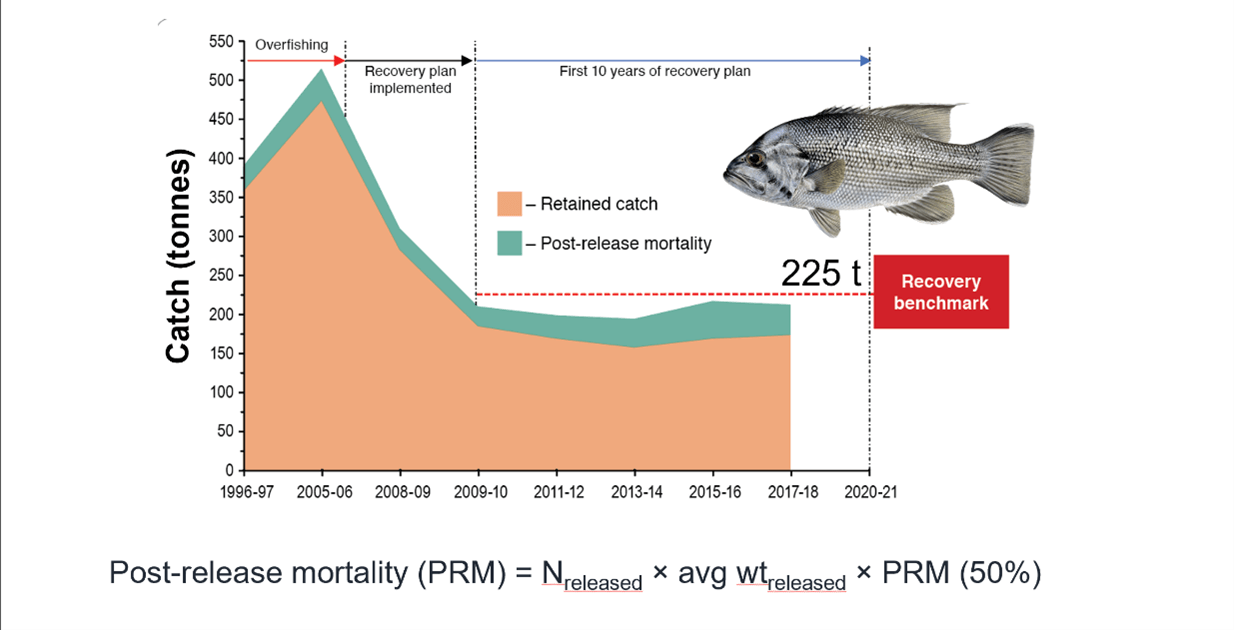 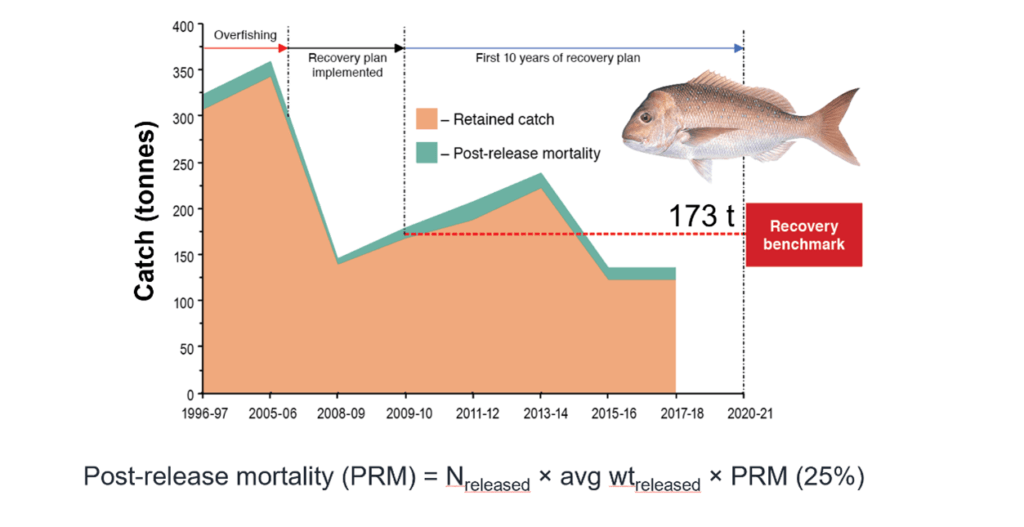 The susceptibility demersal fish have to post-release mortality, especially when captured from deeper water, is why fishers targeting these fish should practice good fish handling and release techniques. To ensure healthy demersal fish stocks for our future, it is important to stop fishing once you have reached your demersal bag limit or target other species such as pelagics. The practice of catch and release demersal fishing has negative impacts upon stock recovery and is not a sustainable fishing method. In the graph above, you can see that the level of post-release mortality in dhufish is high, so it is important to avoid capturing the species unless for consumption.

When handling a fish to be released use wet hands or gloves to support the full length of the fish’s body. When an undersized demersal species is caught, it is recommended that a release weight is used to release the fish to maximise its chances of survival. A release weight allows the fish to be returned to the depth it was caught from quickly, helping to reduce the effects of barotrauma and assist in recovery.

Q. Is climate change having any impact on west coast demersal scalefish?

Answer: The latest stock assessment provides a snapshot of the health of pink snapper and dhufish stocks in the West Coast Bioregion. This assessment has shown recovery in the south of the bioregion is greater than in the north, however, it has not provided any evidence on whether changing climatic conditions have played a part in the slower than expected recovery in the north of the fishery.

Research by DPIRD in 2015 (Fisheries Research Report – See below) undertook a risk assessment of 35 key commercial and recreational species in WA and concluded pink snapper had amongst the highest risk from a changing climate with both dhufish and baldchin groper also ranking as a high priority.

All fishers have seen a southerly migration of fish over the last few years with dhufish now a regular catch on the west coast and catches in Kalbarri increasingly showing species you would expect to catch in the Gascoyne. The changing environmental conditional combined with the expected increase in occurrence and severity of marine heatwaves is something that will need further research as the stock assessment is unable to predict what impact the changing climate will have on fish movement, reproduction success or recruitment pattens. It will be important to ensure whatever management measures are chosen to reduce catches will be compatible with our changing climate.