Well, you won’t have to imagine for too much longer, because deployment of the long-anticipated north metro artificial reef is set to start its designated location 7km off Ocean Reef in the coming days.

WATCH: Tim Grose outlining what species are likely to be caught at the new reef

“Having closely observed the development of other artificial reef systems, we can confidently say we won’t have to wait too long before pelagic fish and species like pinkies, skippy and Samson fish move in on north metro reef making it their home as the reef begins to establish itself,” Recfishwest Partnerships and Business Development Manager Tim Grose said.

“The 293 modules of three different types have been purposely-designed to suit target species in WA waters.

“The modules have already proven to be the perfect home for a range of species on Esperance and Exmouth artificial reefs.

“The architecture of the reef has also been specially designed to accommodate multiple boats fishing the reef at once, while creating a productive marine ecosystem.”

With Recfishwest CEO Dr Andrew Rowland in Derby meeting with the local community about the proposed Buccaneer Archipelago marine parks, Tim joined new Fisheries Minister Don Punch at Fremantle Port yesterday as the first of the 293 purpose-designed concrete modules were loaded onto the barge ahead of deployment.

Get these coordinates in your GPS! 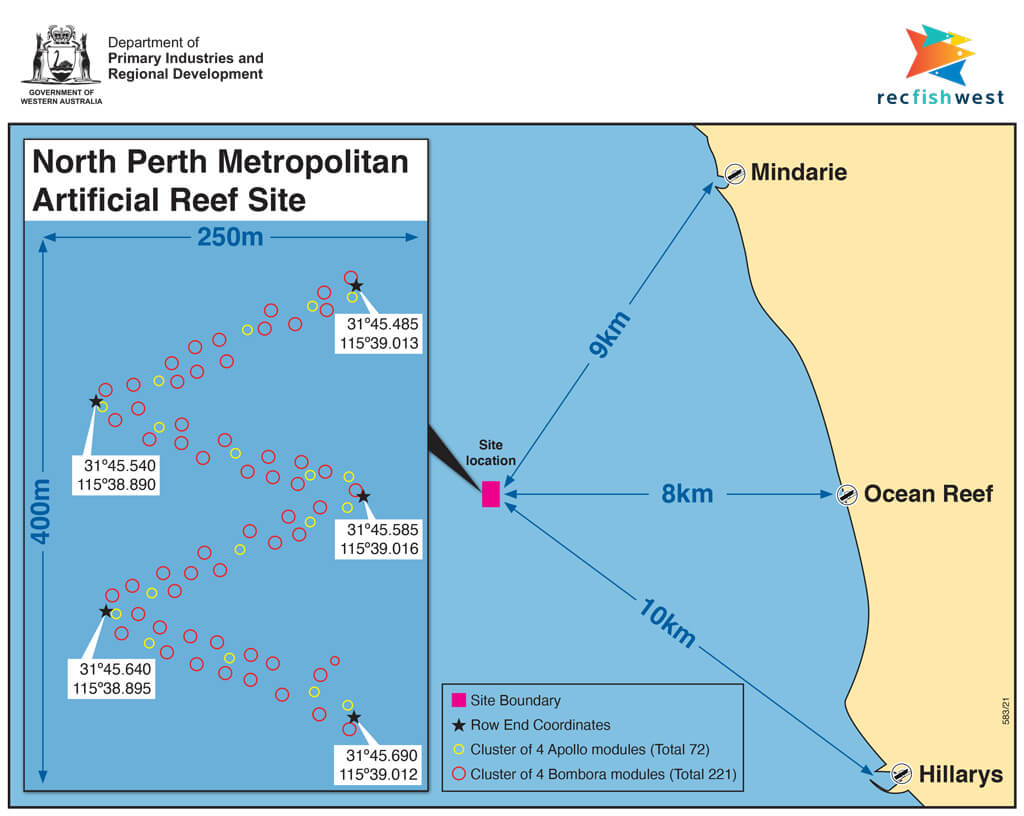 Overseen by the Department of Primary Industries and Regional Development (DPIRD) and funded by the Recreational Fishing Initiatives Fund (RFIF), an artificial reef accessible from northern suburbs boat ramps has been something for which the metro fishing community has been asking for a number of years.

Another chapter in the State-wide artificial reefs program

“And here we are at last, at the start of another exciting chapter in the State-wide artificial reef program, with this the seventh artificial reef to be deployed in WA coastal waters,” Tim said.

“The State-wide FADs trial program has delivered great new fishing opportunities for medium and larger boat owners off Perth and now there’s no reason why this exciting new reef system won’t be able to do the same for small boats.”

Since the Dunsborough and Bunbury artificial reefs were deployed in 2013, artificial reefs have proven to be highly popular with boat fishers with thousands dropping a line or spearing on them and with local communities and visiting fishers reaping the benefits.

The north metro reef will be based in 27m of water, with its purpose-designed concrete modules ranging in height from 0.7m to 1.8m in an area of about 15ha of once-barren seabed.

“I can’t wait to get out to the new north metro reef for a fish especially given the many different fishing options it will have on offer,” Tim said.