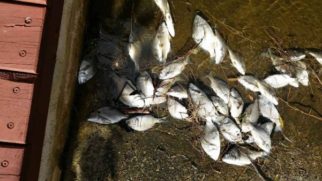 There are no stronger advocates for healthy aquatic environments than recreational fishers. This is why much of the recreational fishing community has been up in arms over the recent fish kill in the Murray River, near Mandurah.

Recent reports indicate that up to 30,000 fish have been killed by what is described by authorities as ‘poor water quality – specifically low dissolved oxygen levels’.

As one of the Murray River’s largest user groups, the recreational fishing community has raised concerns about both the cause of the kill and the ongoing impact on fish stocks in this important waterway.

Recfishwest CEO Dr Andrew Rowland said that more needs to be done to protect WA’s river and estuarine environments, particularly given high level of economic, social and ecological value these systems provide to the community. 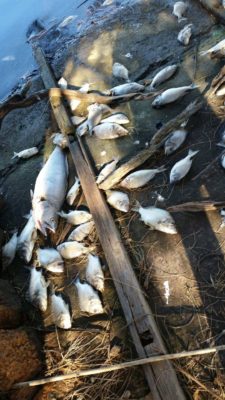 “In addition to this, limited communications from authorities is compounding people’s frustration”.

Many community members are sharing their disappointment through both mainstream and social media channels.

Here are some of the reactions posted to the Recfishwest Facebook page:

• “Exactly the reply I expected…move on, nothing to see here.”
• “No doubt they’ll just say it was a natural event and sweep it under the carpet”
• “There are thousands dead. The smell was not nice. We were on a boat and every slipway and all the banks had dead fish, Bream and Mulloway”

Read what the people are saying here: https://www.facebook.com/recfishwest/

“The fishing community works hard to protect fish stocks and we’re disappointed to see excessive numbers of fish wiped out by a single fish kill event such as this,” Dr Rowland said.

It’s also important to note, that numerous not for profit catchment groups have also been doing their bit  working on bank erosion, revegetation, fencing stock and controlling invasive weeds which helps keep our estuaries healthy.

“This is the second fish kill we have seen in the Murray this year. There’s too much at risk for these events to be treated as normal and ‘expected’!” 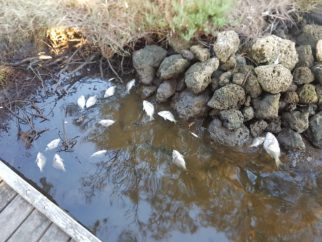 “There’s too much at risk for these events to be treated as normal and ‘expected’!”

The rec fishing community has a demonstrated track record in standing up of our estuary environments and healthy fish stocks including:

Maintaining a healthy catchment is essential to ensuring the sustainability of our estuaries and healthy fish stocks. The community does not accept fish kill events as always being ‘natural’ or the new norm.

Recfishwest still has a lot of questions about this fish kill including:

– Is it safe to eat fish from this system?
– What effect has this had on fish stocks in the system?
– What actions can be taken to protect the remaining fish stocks?
– What is being done to stop this happening again?

To read the Department of Water’s Media Statement, visit:http://www.water.wa.gov.au/news/news-items/lower-murray-river-fish-kill

We thank the community for their images of the dead fish and urge people to continue sending in your photos.