Imagine a fishery full of thumping trophy sportfish on your town’s doorstep and within easy reach of the boat ramp.

Imagine what that would look like – well imagine no further – sit back and enjoy this awesome film we commissioned film-maker and fishing fanatic, Craig Wells, to make about fishing in Roebuck Bay, near Broome. The film premiered recently as a finalist in the town’s Mud and Saltwater Short Film Festival.

The fishing’s better when the fish are biting, and Roebuck Bay is a testament to what can be achieved through managing fish stocks to be healthy and abundant.

While previous management arrangements were biologically sustainable, they did not allow stocks to grow to a size that supports such extraordinary fishing experiences for the community.

In a nutshell, recreational fishing enjoyment is maximised when fishery management delivers a high abundance of fish in places readily accessible for rec fishers.

The results speak for themselves in the film, we’re sure you’ll agree. Could something similar happen in your local fishery? Just imagine….

Many thanks to all of those involved in the making of this film. 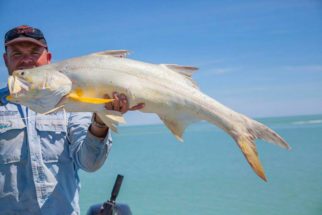 It provides increased protection for the conservation values of Roebuck Bay while maintaining recreational fishing access to this vitally important area. This further builds on the massive advances in conservation made by the removal of commercial netting a couple of years ago, which has provided a massive boost to Barramundi and Threadfin Salmon fishing in the Bay.
Although there has been some opposition to the plan from those who wanted sanctuary zones and fishing lockout restrictions, we believe it compliments current fisheries management and has struck October a good balance between restoring, protecting and managing natural values of Roebuck Bay while allowing recreational use for all stakeholders.

It is important to note that the local community, including the traditional owners, have been extensively involved during the consultation process which led to the final management plan. Recfishwest believes the plan celebrates fishing as an extremely important and highly valued recreational and cultural activity within Roebuck Bay.

The Broome Fishing Club has welcomed the news with former club president Derek ‘Jig’ Albert saying the management arrangements to ensure great fishing and protection of the environment were currently working in Broome and the community hadn’t experienced this quality of fishing in decades. He pointed to a marked rise in key fish stocks, such as Barramundi and Threadfin Salmon, as proof current management was working. 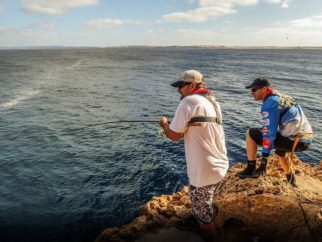 The management plan also provides comprehensive protection for marine mammals which are already protected under the state Wildlife Conservation Act and the Commonwealth Environment Protection and Biodiversity Conservation Act. The Yawuru people will play a significant role in the joint management of this park and Recfishwest looks forward to working with both Parks and Wildlife and the Yawuru PBC in promoting stewardship of the Roebuck Bay environment.
Our commitment is to protect, promote and develop sustainable, accessible, enjoyable and safe fishing for the benefit of the community.

Soon Kununurra will be able to provide both great impoundment and wild river fishing opportunities for visitors to the town, a unique combination sure to appeal to many anglers.
(Photos of competition courtesy of ABC Kimberley)

Recfishwest today said the release of the new Roebuck Bay Marine Park Indicative Management Plan provides a win for both conservation and the community, especially as it celebrates the role recreational fishing plays in the Kimberley.

Recfishwest CEO, Dr Andrew Rowland said the new marine park demonstrates that recreational fishing is compatible with marine conservation.
“We are pleased to see management activities focused on conserving the values that underpin good quality fishing experiences and where shared access can be enjoyed by all,” Dr Rowland said.

“We’ve already seen important conservation activities in the Kimberley, namely the stocking of the iconic Barramundi, where recreational fishers are giving back to help maintain a sustainable fishery.”

The new management plan is also important in fulfilling the cultural aspirations of the Yawuru people who will play a significant role in the planned joint management arrangements of this park.

“This type of management will bring the community closer together as it provides opportunities to share cultures around fishing.”
The management arrangements in this marine park complement the government’s 2013 decision to purchase all of Roebuck Bay’s commercial netting licences under the Kimberley Science and Conservation Strategy.