Swan River prawning is a resurging pastime following the restocking of  over 4.5 million prawns since 2013. This fishery has been given a new of lease of life after historic fishing activities, coupled with growing environmental pressures and impacts from urban development, left prawn populations on the brink.

Netting for Western School Prawns and King Prawns was historically a popular summer pastime in the Swan and Canning Rivers  throughout the 1950’s to 1980’s. It also formed the basis of a commercial fishery over this period. As time went on prawn numbers declined and significant catches have not been reported since the 1990’s.

Recfishwest continue to assist the Prawn Watch program, a citizen science projects where recreational fishers can aid in reporting prawn catches, whilst an exciting and important aquaculture stock enhancement project is underway to improve river prawn populations. The program is intending to couple restocking with research to improve understanding of the factors affecting wild prawn reproduction and bring families back to the water again.

On the back of this research and restocking efforts it seems a new door is opening to recreational fishers to once again enjoy the benefits of river prawning.   There is currently no licence required to fish for prawns, but there are regulations on gear restrictions and closures with regard to trawl netting, as well as areas closed permanently to prawning. The current bag limit of 9L/person is also under review and we’ll be involved in any decisions affecting either the sustainability of the stock or the community’s fishing experiences.

If you do find yourself tempted into a trip down to the water’s edge in search of a feed of prawns then there are a few practises that you should follow to ensure the continued improvement of river prawn populations, protection of the river system ecology and that the river can be enjoyed by all of the people that use it. 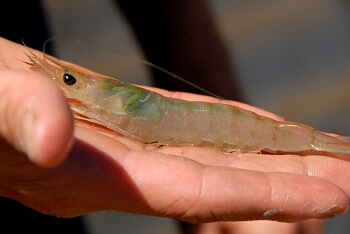 • Dealing with By-catch: Return all by-catch to the water quickly
One of the biggest problems with netting is the chance of by-catch as prawns often share their habitat with many other fish and invertebrates. It is important to know that you are not allowed to net for any other species with a prawn net and if these species are accidentally caught it is essential that you return all unwanted or unlawful by-catch to the water safely and quickly.
You should try and work out a method by which you can process your catch in the water and release the bycatch in a way that maximises their survival. This includes the often unwelcome blowfish and it is also noteworthy that any weed or other material that becomes caught in your net should not be left in a messy heap by the river banks and that rubbish is discarded of thoughtfully.

• Preserve Prawn and Fish Habitat: Stick to sandy bottoms where possible
We urge you in your prawning endeavours to show a sense of etiquette and to be careful around the habitats which you fish. One important tip is you don’t need to dig up the river bed to secure a catch of prawns. It’s important to note, a lot of prawn catches come when fishing sandy or muddy bottoms, so you shouldn’t need to walk through weed beds when you’re prawning.
When accessing the banks be sure to walk on marked paths or well-worn access points to the water to avoid damaging shoreline vegetation that has an important place in maintaining the entire marine ecosystem.

• Release Gravid (pregnant) Females: To ensure healthy stocks for the future
One of the most important recommendations to ensuring our populations of river prawns continue to grow is to inspect your catch of prawns for any gravid (pregnant) females, which will display a bright green egg mass around the head and down the middle of the back. Each gravid female may produce between 20,000 and 60,000 eggs, so releasing gravid females will ensure there are plenty of prawns next time you head down to the river.

Recfishwest is fully committed to helping maintain and improve the health of the Swan River ecosystem, in conjunction with the Department of Parks and Wildlife (formally known as the Swan River Trust), local governments, recreational fishers and river users.