August 4th and 5th was a weekend jam-packed with activity options for families in the Pilbara communities of Karratha and Dampier. The annual FeNaClNG Festival (Stands for: Fe[Iron]NaCl[Salt]NG[Natural Gas]) celebrates community and brings in supporters and spectators from far and wide. Local group KSEN (Karratha Science Engagement Network) for ‘epic’, (empowering people in communities), took the chance to team up with Recfishwest and local fishing clubs to hold two Junior Recfishwest SunSmart fishing clinics.

More than 40 families participated across the two clinics at King Bay Game Fishing Club and Nickol Bay Sportfishing Club. As the second session of the day drew to a close, an unexpected finale unfolded. 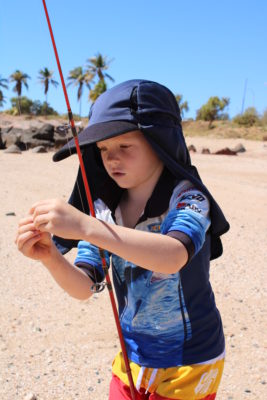 It’s not often Recfishwest call an early end to one of our fishing clinics; but when the younger kids are losing interest as a result of catching just two fish over two hours, instructors Matt Gillett and Kim Burton were left with little choice. The group ventured back up to the Nicol Bay Sports Fishing Club (at Hampton Harbour Boat and Sailing Club) to hold the clinic debrief where Matt and Kim recapped the important SunSmart and fishing safety messages and handed out a huge array of prizes. Participants were spoiled for choice with a huge selection of lures thanks to Nickol Bay Sportfishing Club and ‘epic’/KSEN as well as hats, water bottles or books from Recfishwest and SunSmart. 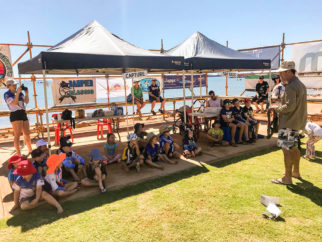 So after completing the quiz and prize session, Kim (ever keen for one more cast) suggested if any of the children would like to finish off the session with a little more fishing he was happy to accommodate with some “one on one” tuition.

Stephen Farey and son James (aged 7) from Denmark in WA’s deep south, were in Karratha for the FeNaClNG weekend and had some unfinished business. Like many others for the day, James had not landed a fish during the session…. that was hopefully about to change. 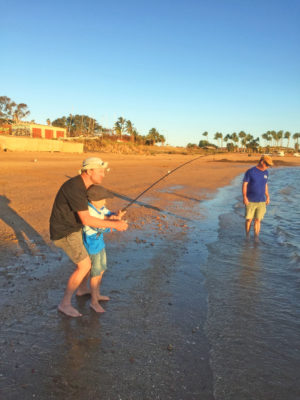 Stephen and Kim chewed the fat over past clinics Kim had conducted at the location, with Kim pointing out over the twenty or so clinics he had done there, never had he seen a clinic with so little fish. Over the years at past clinics the participants had caught gardies, queenfish, squid, juvenile giant and golden trevally, flathead, javelin fish and massive diamond scale mullet to name a few……..all missing from this clinic. This time no amount of berlying from Kim and Matt had made any effect whatsoever.

So after another 30 minutes of fishless time had passed, the sun hit the horizon and as Kim called ‘last cast’, Stephen’s 6kg monofilament line took off with line peeling from the reel. It was pretty evident that there was a fair fish on the end of it. So while Stephen was holding the rod, James suddenly sprung to life. To start, dad Stephen was a little over exuberant with the tiny outfits meant for smaller fare so Kim suggested that he let the fish run and take line from the spool when it wants to go then pump and wind when the fish tires. Not wanting to miss out on the action, James all of a sudden wanted in and a father and son team effort ensued. 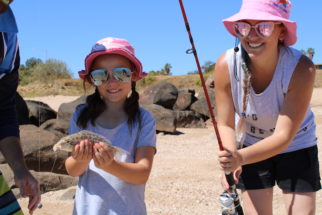 The water in front of the Nicol Bay Sports Fishing club at the time was around waist deep. The fish took runs parallel to shore leaving large boils behind. With the murky water there was no way of telling what they had hooked, but with past catches from this beach everything pointed to one of the trevally species, more than likely a good size golden trevally.

Too much tension on the line would have seen the line break, not enough and it would be disaster into the rocks and dreams about a fish of a lifetime fade away with the looming sunset. It wasn’t to be as the father and son combination had the culprit in the shallows after a six or seven minute tussle but the fish would not give in that easy. With the fish only metres from shore there was no way of telling what we had on in the murky shallows, a glimpse of what was hooked would have satisfied everyone at this delicate stage.

And after what must have been the best part of a ten minute fight we caught a glimpse of the red tail and then the whole fish. They had done it. A 46cm Mangrove Jack caught on a size one circle hook and small piece of prawn carefully dragged on to the shore safely landed. A real team effort in what many anglers with greater experience could only dream of.

”This was one of the best days of my life!” – Said James, reflecting on the day when talking to his dad that evening. 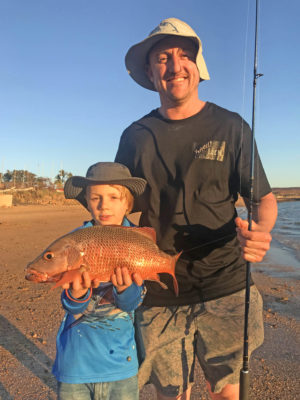