There has been more great news for WA barra fishers with an extra 100,000 juvenile barra released into Lake Kununurra last week and another 100,000 fish released this week, taking the total number of barramundi stocked in the lake since 2013 to more than 850,000.

The lake has been quickly establishing itself as a world-class barramundi fishing location and local members of the Lake Kununurra Barramundi Stocking group say fish are averaging more than a metre!

Regional Economic Development (RED) grant and the Broome Aquaculture centre did such a good job in breeding barra they ended up with twice as many fish as they needed! This provided an opportunity for even more fish to be stocked into the lake, but they needed additional funds to transport the extra fish to Kununurra.

Acting quickly from a request by Recfishwest, the Minister for Fisheries approved the use of recreational fishing licence funds to transport and stock the remaining 100,000 fish. 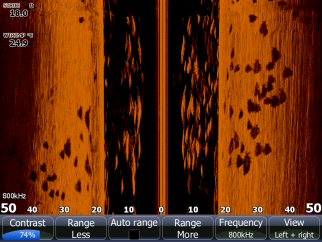 Avid local recfisher Curt McCartney has caught and tagged more than 100 barramundi in the Lake and says the big, fat, bronze monsters are often not difficult to find, but can provide a challenge to entice as they’re all so well fed on the lake’s abundant supply of bait fish!

Check out these sounder images showing barramundi schools hanging just off the bottom.  If that doesn’t get barra nuts’ casting arms twitching – we don’t know what will!

Check out this 1.3m barra caught from the lake by barra enthusiast Curt McCartney after this article was originally published!

This is just more proof that the barra stocking program is really delivering the goods.

When barramundi were first stocked into Lake Kununurra in 2013, not many people imagined the quality of fishing that the lake would produce in such a short amount of time.

The abundance of baitfish and lack of predators within Lake Kununurra saw barramundi reaching one metre in length within three years of age!

Any barramundi over one metre is a phenomenal fish and a bucket list target for many fishers.

Lake Kununurra is evolving into a sensational destination for anglers to chase their first barra and is a bona fide big barra waterway that continues to produce trophy sized fish.

The stocking of Lake Kununurra has forged the waterway into perhaps WA’s best barramundi fishery.

More than 650,000 barramundi fingerlings have been stocked since the project was announced back in 2012.

We’re pleased to report that more than 100,000 more barramundi fingerlings have been stocked into Lake Kununurra this year, including many at today’s stocking event.

Read what the Fisheries Minister had to say about today’s stocking here.

As planned, Lake Kununurra is now regarded as a world-class trophy barramundi fishery (plus there are no saltwater crocs or huge Kimberley tides to deal with).

If these monsters continue to grow as expected it won’t be long before the Lake could hold Australia’s biggest barra.

If you want to keep up to date with the latest catches, check out Lake Kununurra Barramundi Stocking Group on Facebook.

If you ever find yourself lucky enough to explore the Kimberley, ensure you visit Kununurra and test your luck tracking down an iconic barramundi on the lake’s calm protected waters.

Catching a big barra is a quintessential Kimberly experience and Lake Kununurra is now one of the best places to do it!