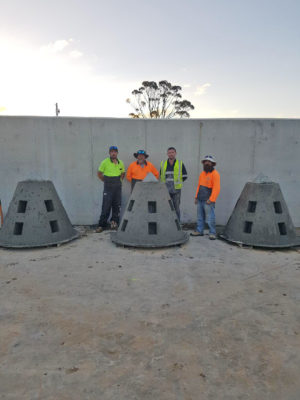 The long awaited Esperance Artificial Reef development is another step closer with construction having officially commenced on Wednesday, June 6.

Local volunteers from the Esperance Deep Sea Angling Club will partake in a number of ‘busy bee’s’ throughout the month of June in order to build the artificial reef.

A total of 120 specially designed modules, produced of locally sourced concrete, will be used to create a fish habitat more than twice the size of the Ports Football Oval.

The $600,000 artificial reef development has been several years in the making.

The development came to fruition in December 2016, after it was announced it would receive $300,000 in funding from the Recreational Fishing Initiatives Fund.

In March last year, the project doubled in size after the Goldfields Esperance Development Commission matched the existing funding.

The local vision, which has now developed into a 150 tonne project, was designed to rectify the substantial loss of fishing access in the region due to geographical and environmental factors.

South East Coast Recreational Fishing Council chairman Graham Cooper said it was a special feeling to know that the reef build was something that both members and their children would be able to enjoy.

“It’s great that we could keep the work and the reef materials sourced locally,” he said.

“I can’t wait to catch a queenie or a sambo on a reef that the Esperance fishing community built with their own hands.” 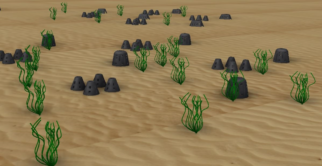 Recfishwest Research officer James Florisson said the reef design was configured specifically for local species and had been thoughtfully designed by engineers, marine biologists and ecologists.

Mr Florisson said the reef configuration would create a productive ecosystem for a variety of different species of fish.

“It will provide a home for species such as Queen Snapper, Breaksea Cod, Skippy, Harlequin and Pink Snapper,” he said.

“This could not have been done without the support of the community and the volunteers who have worked tirelessly to make this happen.”

The reef was built and will be installed by artificial reef experts at global marine foundation Subcon.

It is expected the reef will be deployed in September this year.