WA Environment Minister Reece Whitby recently wrote to Recfishwest advising vehicle access to the Hooley Road entrance to Boranup’s South Beach will not be restored after being abruptly closed by the Department of Biodiversity, Conservation and Attractions (DBCA) with a boulder blockade in March 2021. 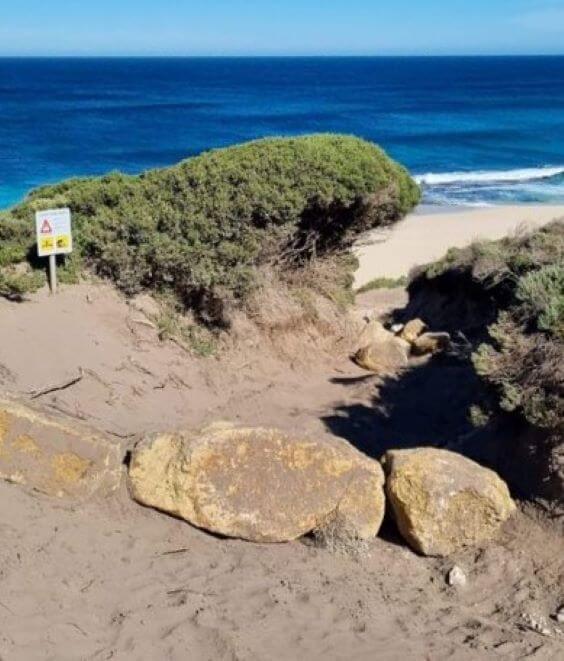 South Beach within the Leeuwin-Naturaliste National Park is a popular fishing beach providing shore-access to deep water where fishers can target snapper, mulloway, tailor and salmon.

Recfishwest strongly believes this decision completely ignores something of immense value to the WA fishing community.

“Yet, here is another example of a unilateral decision to simply ban an activity which has been undertaken for generations – driving along the beach to our favourite fishing spots is an important part of our WA culture, it’s part of what makes WA great.”

Hiding behind a flawed management document

Since first publicising this issue in March 2021, Recfishwest has raised the closure with the Director General of DBCA along with Environment Ministers Dawson, Sanderson and Whitby and with Fisheries Minister Punch.

After losing access to South Beach for two salmon seasons, and repeatedly raising this issue at the highest levels of government, the Environment Minister has missed the opportunity to address the issue on behalf of the community and ignored our reasonable calls and suggestions for a compromised approach. Instead, he appears to have been simply led by his department, which itself is hiding behind a management document that is seriously flawed.

The Leeuwin-Naturaliste National Park Management Plan said it should be closed in line with its vehicle access plan established in 2015.

Yet, this management plan doesn’t identify any environmental or conservation value that is compromised by allowing vehicles to access South Beach.

In Recfishwest’s view, the restriction on vehicle access to South Beach seems to have more to do with making management easier for DBCA than protecting environmental values or encouraging sustainable use and enjoyment of the environment.

“The disappointing decision by the Minister not to restore a beach access track is a slap in the face for local fishers,” said Andrew.

Despite the beach blocakde debacle, Recfishwest is still urging people to contribute to DBCA’s marine park planning process with public consultation currently taking place on several proposed marine parks as part of the McGowan Government’s Plan for our Parks Initiative.

“While some may say ‘Why bother?’ it is more important than ever that people contribute to these processes, so  that what matters most to fishers is not ignored,” said Andrew. “The State’s recreational fishers deserve better.”