FADs can provide truly memorable fishing experience, but how do you make the most of your experience and return to the boat ramp with memories of speeding, leaping, golden-green fish (and perhaps a few in the esky)?

There are many ways to fish the FADs, but “the early bird gets the worm” maxim applies here.

While dolphinfish can be extremely aggressive, they are also renowned for shutting down under boat pressure so being the first one on the FADs will invariably pay off.

Before heading off on a FADs mission make sure your boat, radio and safety gear is in good working condition. Ideally trips to the FADs should be done in convoy with another boat, if you are looking to find another boat to venture out with post on any of the local fishing Facebook groups and you should be able to find a companion. When heading out to the FADs, remember to keep an eye out for cray pots, anchored boats or any other object that may be in the water. Check the weather the morning before you head out as the forecasts can change and where the FADs are unexpected changes in the weather can cause major issues. In addition, make sure you log in with the Volunteer Marine Rescue over the radio

Remember not to tie off to the FAD!

Boats should never tie off to the FAD. The mooring gear is designed to secure the FAD float and line only. While this may be tempting as the currents can be strong out there this may damage to the FAD and the radar reflectors on them or worse cause them to break away. If the current is moving you too fast, deploying a sea anchor will help slow down your drift and give you more time in the strike zone.

Due to the FADs being located reasonably far offshore, limited good weather condition windows to fish them means it’s unlikely you’ll be the only boat on the FADs. This means it can get crowded on the FADs and some simple etiquette rules will help keep things running smoothly.

In the likely situation that you are not the only boat fishing the FAD, patience will be needed as only one boat should be in the strike zone at a time. Boats should wait roughly 200m up-current until the strike zone is clear then make their pass at it. Once you have exited the strike zone circle back up-current by taking a wide course. The idea is to keep the dolphinfish from shutting down for as long as possible by keeping the boat pressure in the strike zone down. 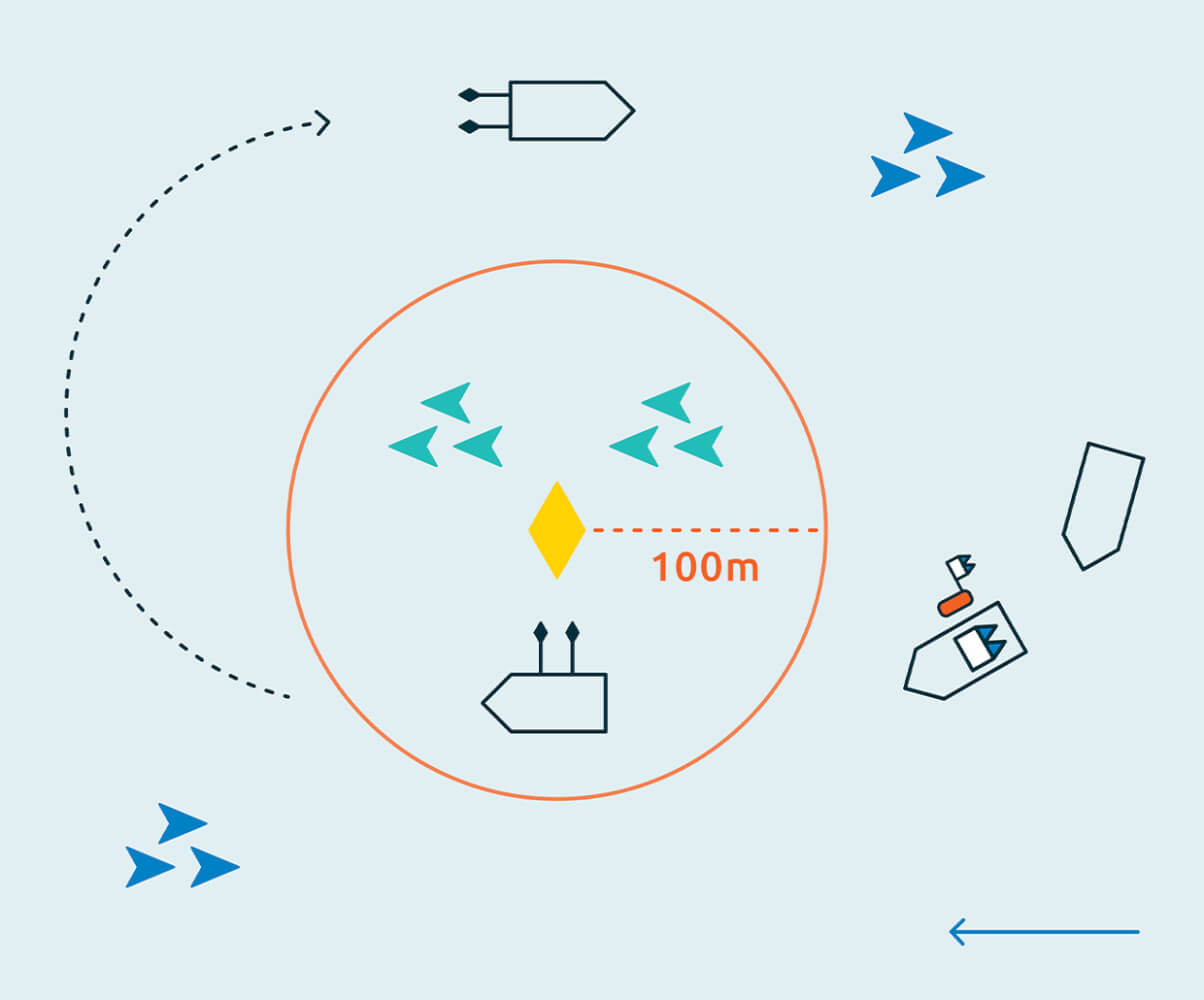 Packs of pelagic species such as wahoo, tuna and marlin (can be found in the vicinity of the FAD)

Wait up current until it’s your turn to drift past the FAD.

Drop spear fishermen up current, display the dive flag, circle wide and pick up down current.

Cast, troll or spear close to the FAD one at a time. Do not tie on to the FAD!

Take a wide circle back to avoid shutting down the dolphinfish.

Troll skirts and diving lures wide of the FAD in search of other pelagic such as wahoo, tuna and marlin.

Boats should never tie off to the FAD. The mooring gear is designed to secure the FAD float and line only. While this may be tempting as the currents can be strong out there this may cause damage to the FAD and the radar reflectors on them or worse cause them to break away. If the current is moving you too fast, deploying a sea anchor will help slow down your drift and give you more time in the strike zone.

Spearfishers should be aware of other FAD users and should not enter the water if other boats are around the FAD. Likewise, anglers should wait until spear fishers have completed their drift past the FAD before deploying lines (spearfishers usually only spend a short time period around the FAD). It is highly recommended spearfishers display the “Divers Flag A” when drifting in the water near the FADs and have a boat with an operator acting as a lookout accompany those in the water.

FADs are there for the benefit of all recreational fishers and courtesy should be extended to fishers who are already using a FAD and new arrivals should be accommodated. Please recognize conservation values, be responsible, share with other users and take only as many fish as you need.

The easiest way to fish the FADs is by trolling lures in close proximity to the devices. A combination of diving lures, such as Halco Laser Pros and/or skirted lures, will give you a good chance of getting a bite. While dolphinfish will school up close to the FAD, larger predators such as wahoo, tuna and even marlin may be in the wider vicinity, so it pays to put the lures out when approaching the FADs. Once at the FAD, troll past it at a safe distance remembering not to get too close as hooking up to the rope of the FAD will result in lost tackle, time, spooking of the fish and a safety hazard for those who retrieve the FADs at the end of the season. Troll roughly 100m past the FAD and then make a wide sweeping turn looping back up current to make another pass at the FAD. The wide turn will help avoid shutting the dolphinfish down, locate other pelagics in the vicinity and allow other boats to have a safe pass at the FAD.

While trolling is an effective method, setting up a drift and casting lures is arguably the most enjoyable method. Lures such as metal slices, stickbaits and minnows worked at a high speed will all work effectively. The larger ‘bull’ dolphinfish will often sit on the outskirts of the school slightly deeper, so try letting your lure sink for 10 seconds before retrieving it to target them. Proven dolphinfish lures include Zipbaits SSM 120, Nomad Madscad 95, Halco twisties and soft plastics, however, anything fast and shiny can be effective on its day. 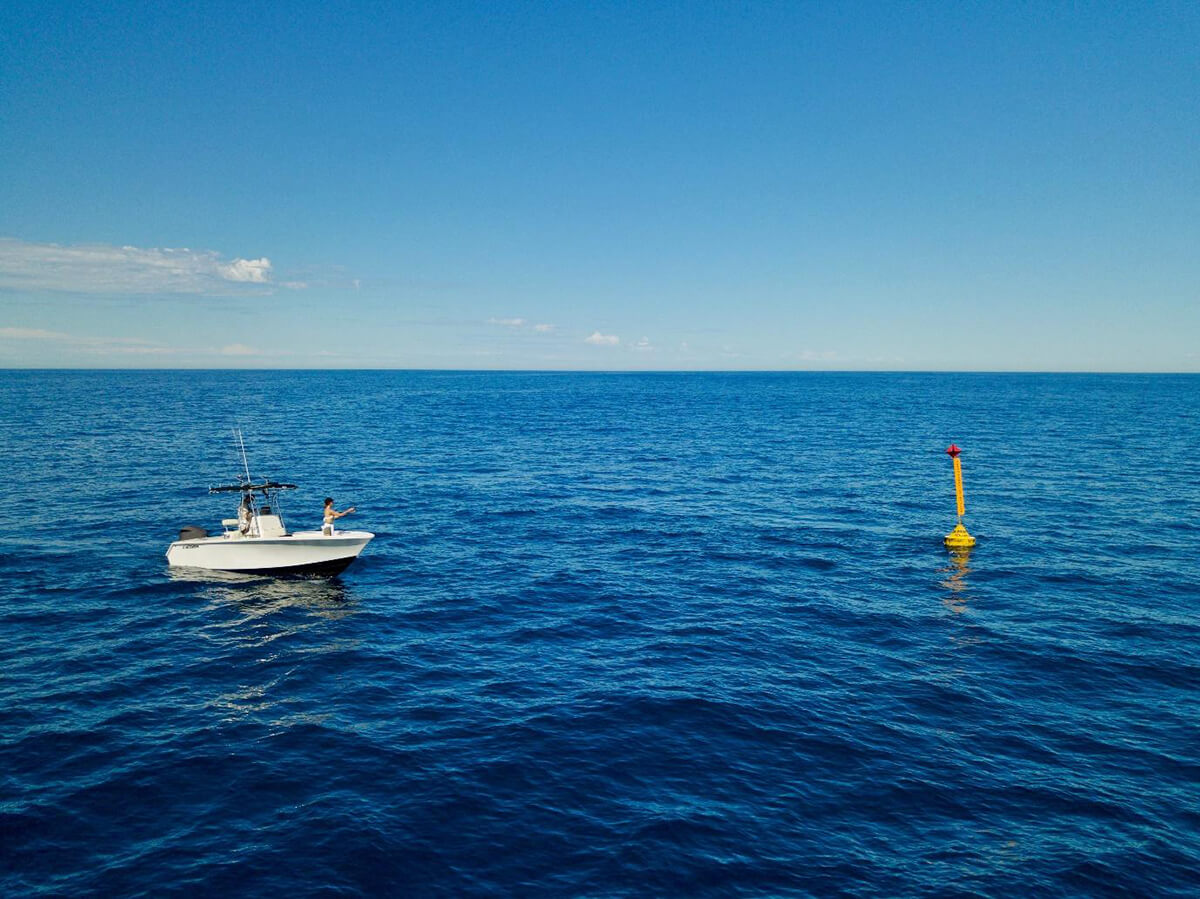 It is inevitable that the dolphinfish schools will shut down and it is a strange situation when it does because you’ll often be able to see them, but they will not respond to lures. Once this happens a switch to mulies will often be the only way to tempt them once again. A simple 40lb leader with a mulie pinned on a 3/0 circle hook or mounted on a snell rig is ideal and, depending on the weather conditions, the addition of a small sinker will help keep your bait where the fish are. Using a similar method to casting lures, start your drift 100m up-current and deploy a couple baits out the back of a boat.

Search for FADs near you!