The final plans for the Buccaneer Archipelago marine parks were announced by the State Government and Traditional Owners from the islands on Sunday, 31 July.

We have already received several queries from people who fish in the region and are keen to understand what the marine parks plans will mean for access to their favourite fishing spots in the Buccaneer.

Currently, the final joint management plans for the marine parks can only be found on the Department of Biodiversity, Conservation and Attractions’ (DBCA’s) website ‘Approved management plans’ page under an A-Z index in three separate documents:

At 130-plus pages, the documents are not easy to unpack for fishers who simply want to understand where they can and can’t fish. In addition, some key details are still to be determined, for example, it is not known what additional restrictions may be placed on to fishing activities in the purple Special Purpose (biocultural conservation) zones.

So, to assist with this, we have put together a single consolidated map incorporating all three marine parks with a simple key explaining what activities will be permitted in each zone. We understand the new marine park zones are likely to come into legal effect in the first part of 2024.

We have also tried to answer each of your questions relating to the marine parks as best we can. We don’t yet have all the answers to your questions and have been seeking further clarification from DBCA since the plans were released on Sunday. 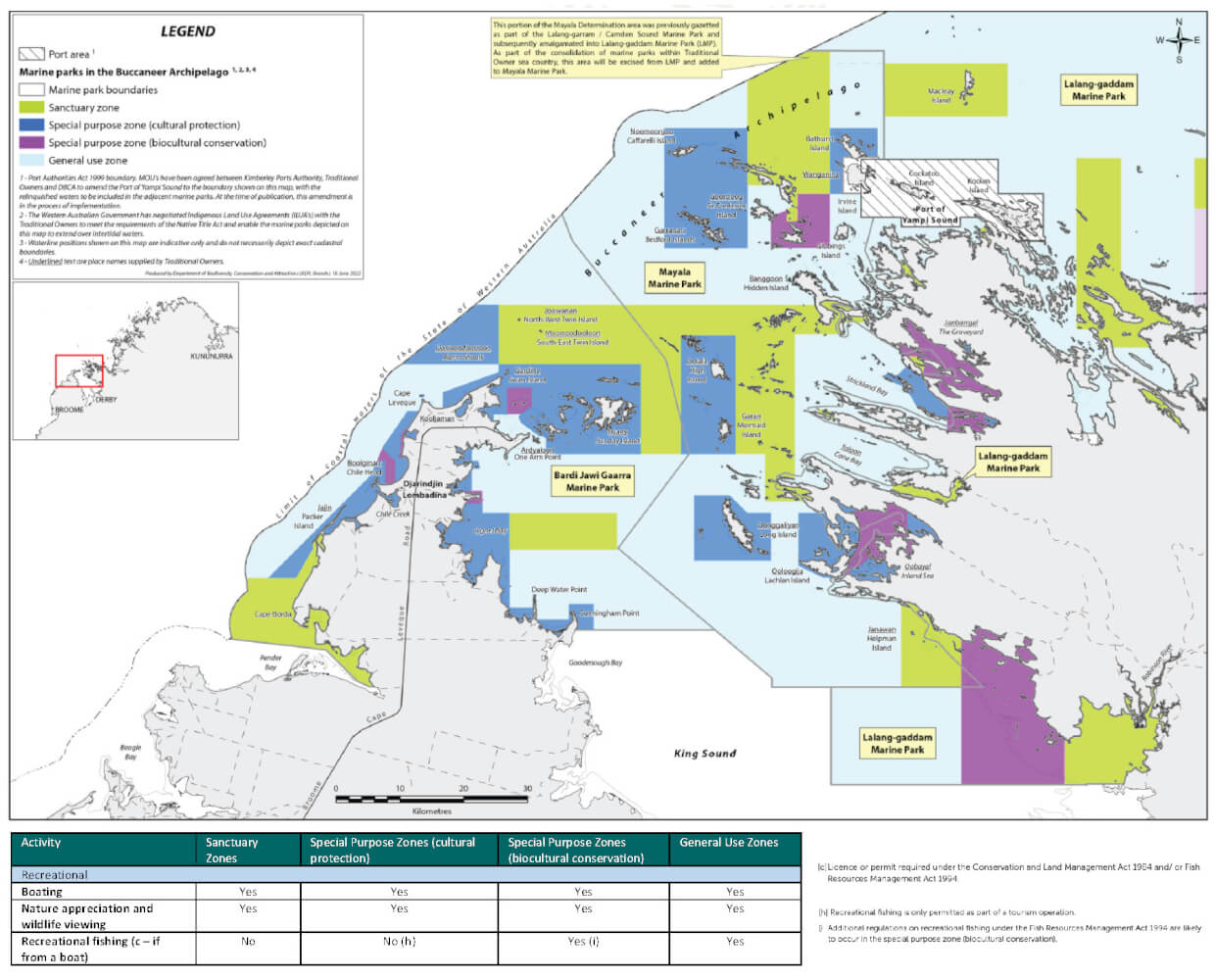 Disclaimer this is not an “officially endorsed” map – in the absence of clear fishing-related information regarding the parks in one location, Recfishwest ccpied this map and created the table of permitted uses from the management plan – we have requested a similar consolidated version of the map directly from DBCA and will put this up on the website as soon as we receive it.

Question: In the marine park plans, it says that “additional regulations on recreational fishing under the Fish Resources Management Act 1994 are likely to occur in the purple special purpose zones (biocultural conservation)” – what are these likely to be and how will they be determined?

Answer: At this stage we don’t know what these rules might be – but in the Recreational fishing section of each of the three marine park plans it says, “There are some areas in the marine park which are of high cultural significance and valued highly by the local Derby community for recreational fishing. Some of these areas have been zoned as a special purpose zone (biocultural conservation). The purpose of these zones is to provide for the conservation of ecologically and culturally important marine ecosystems such as marnany (reefs) and mangroves whilst continuing to allow for low impact recreational and commercial activities. The JMB [Joint Management Body] will work with DPIRD, traditional owners and stakeholders to develop some additional fisheries regulations for these zones to ensure that recreational fishing carried out in these zones is culturally appropriate.”

We are seeking clarification from DBCA how the process in determining the “additional fisheries regulations” will work and what sort of new rules it might result in.

Question: The plans say that in the darker blue special purpose zones (cultural protection) that recreational fishing is only permitted as part of a tourism operation. What sort of tourism operations does this mean?

Answer: We don’t know and we are seeking further clarity from DBCA on this.

Question: Shouldn’t the plans have included details on what fishing activities will be allowed in these zones before they were released?

Answer: We agree and, in our view, it further demonstrates why not including recfishers in the initial marine park plans designs was a mistake which has already led to confusion among future marine park users.

Question: Will I still be allowed to moor my boat, land my boat and camp on the islands?

Answer: There are no restrictions around boating in any of the zones. The marine park plans don’t address land-based activities or restrictions. You should be aware though that you are required an entry permit to several islands in Dambimangari, Mayala and Bardi Jawi country. In addition, you will need to be accompanied by a Traditional Owner guide in certain areas. You can find more information on the Dambimangari Aboriginal Corporation’s website here and the WA Government website’s ‘Apply for a permit to access or travel through Aboriginal land’ page here.

Question: When will the marine parks boundaries and zoning be coming into effect?

Answer: The Government says they are likely to come into legal effect sometine in the early part of 2024

Question: Without taking a large map and/or plotting out multiple coordinates on my chart plotter, how will I know where I can and can’t fish once the marine park plans come into effect?

Answer: We will update the GPS interactive marine parks map on the free-to-download Recfishwest fishing rules app. We have developed this feature to assist fishers in all areas of the State by displaying your location in relation to marine park zones with all the info on what you can and can’t do in each zone. We will update this mapping feature to display these new marine parks when they ‘go live.’