Recfishwest’s citizen science project Reef Vision is giving the WA fishing community a glimpse of the fish they are vying for.

But at the same time, they are also contributing to important science research. With recent artificial reef installations off the WA coast, scientists have been monitoring the colonisation of them and any changes to the fish community.

Currently there are more than 100 active recreational fishers already providing data to Reef Vision, which are critical in making this program a success. Check out some of the captured footage from one of our volunteers via the link below!

Volunteers throw a baited remote underwater video (BRUV) system out from their boat and record an hour of video footage over the artificial reefs while they are fishing.

The videos are then sent to Murdoch University and Recfishwest researchers for analysis. 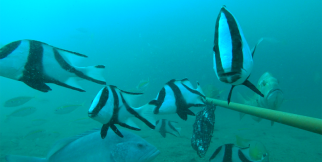 BRUVs consist of a GoPro video camera attached to a weighted PVC frame with a baited arm and bait bag attached to a float on the surface by rope.

The videos have revealed 34,000 different individual fish from 79 species, including sawsharks, Samson fish, snapper and mulloway as well as a few extra surprises such as turtles.

“Volunteers absolutely love it, and a lot watch the footage straight away and share on Facebook — it’s a form of fishing of its own,” James said.

“And the data shows us how well the artificial reefs are tracking and what’s growing on and around them.

“Traditional methods would have been cost prohibitive, so to have the community monitoring the reefs and producing rigorous ecological data is fantastic.”

Due to its success, Reef Vision is being expanded State-wide.

Reef Vision is well supported by local industry and businesses.

Check out some other footage below: