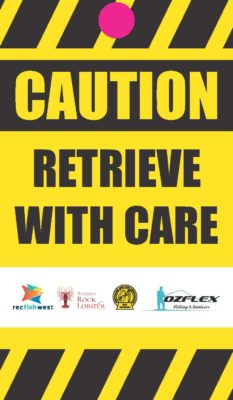 A new safety initiative to keep thousands of Western Australian lobster fishers safe will be rolled out along the West Coast in the coming weeks.

In recent years, deck hands have been injured after being struck by fishing gear snagged on lobster pot lines as pots are hauled to the surface on a high-speed winch.

To combat the dangers of snagged fishing gear, Recfishwest and Western Rock Lobster have launched the Snag It Tag It safety initiative and are distributing caution tags to recreational fishers.

“Rec fishers share the water with many other users and it’s important we all work together to ensure everyone returns home safe after a day’s fishing,” Dr Rowland said.

The Snag It Tag It initiative arms recreational fishers with waterproof caution tags to tie to ropes and floats if they accidently snag fishing gear on a lobster line or pot. This will mean deckhands on commercial fishing vessels face less risk of injury when pulling in pots at high speed.

Autumn is a popular season for recreational fishers to head out and fish for iconic WA species such as Dhufish, Baldchin Groper and Pink Snapper.

Recfishwest, the Australian Anglers Association (WA Division) and Western Rock Lobster have printed 4000 Snag It Tag It caution tags which have been distributed to local tackle outlets along Western Australia’s coastline.

“This is a great opportunity for recreational and commercial fishers to work together to keep each other safe,” Mr Taylor said.

“We will be raising awareness and educating commercial fishers to be on the lookout for the caution tags, so they can operate winches with extra care and at a safe speed.”

“Our busy waters can be dangerous; these tags will be an important safeguard for commercial and recreational fishers alike.”

Western Rock Lobster and Recfishwest believe everyone should return home safe after a days fishing.

Incredible injuries can occur from fishing hooks and sinkers! To combat the dangers of snagged fishing gear Recfishwest and Western Rock Lobster have launched the Snag it Tag it initiative