What’s your best session fishing for black bream? Can you imagine a session catching over 100 fish, where the bream averaged over 1 kg each…with some up to 2 kg’s?

Local fishers from Albany and surrounds wanting to learn more about why fishing has changed in the area and what can be done to bring back the glory days came down to the Fishers for Fish Habitat Forum held in Albany earlier this month. The forum, which was run by a partnership between Ozfish Unlimited and Recfishwest, provided a unique opportunity for fishers and habitat experts to come together and combine their knowledge to try and work out the key drivers for changes in the quality of local fishing and what could be done to bring back lost fish habitat and better fishing. 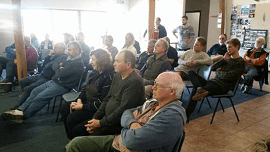 The knowledge local fishers have about changes in the quality of fishing in the area provided a rare insight into how big an impact changes in fish habitat have actually had on fishing. An important part of discussions was led by Western Angler editor Scott Coghlan who talked with local veteran Jim Allan and bream young gun Callum Dowell on their perspectives on changes in the area. Both Jim and Callum had noticed significant changes in the quality of fishing and fish habitat over the years. Jim told tales about some epic bream fishing that used to be available around Albany in years gone by including bream that averaged over 1 kg each, with some pushing 2 kg’s while Callum said at its best it wasn’t unusual to catch over 100 fish in a session! Jim suggested that in terms of habitat loss, one of the key changes that had led to a reduction in the quality of fishing was the huge loss of seagrass in Oyster Harbour, while decreases in rainfall were also hurting the system. Callum had noticed similar changes and noted that on some of the flats he fished the sand had changed over the years from being hard and course to soft mud.

It was amazing to see how close the changes seen by fishers matched with what had been seen by the habitat experts, who further discussed how these changes fit in with the changes in fish habitat. Local seagrass expert, Geoff Bastyan, reinforced the changes seen by Jim to seagrass in the harbour and showed how with the right support, it was possible to bring back much of this lost habitat. There was also some great discussion about the import role bringing back oyster reefs will have on the harbour with Black Bream, Skippy and Yakka’s already seen investigating the developing reefs.

Karen McKeogh from the Department of Water also led a great discussion about how modifications to the Torbay lakes meant that a highly productive system went from producing Murray Cod up to 1.3m to now having health warnings. This forum highlighted the importance of sharing the knowledge fishers have about the changes they have seen in their local systems and their eagerness to bring back some of the lost crucial fish habitat, and better fishing. If you know a fish habitat in your local waterway that needs to be restored, talk to locals in your community and get in contact with the Recfishwest Habitat Officer Michael Tropiano to see what can be done in to bring back fish habitat and better fishing.

Everyone at the forum was hugely appreciative of the members of the Albany Boating and Offshore Fishing Club for hosting the event and all their assistance in running the forum and for support for the event from The Nature Conservancy and the Fisheries Research and Development Commission.