If you haven’t fished in Exmouth, you haven’t lived! The warm waters of the Ningaloo coast provide some of the best fishing experiences Western Australia has to offer and if this week’s capture is anything to go by, the fishing is better than ever.

Eddy is a well-known Marlin champion. He has over 1000 marlin releases to his name, including some recaptures of his own fish. Recently Eddy and others in the Exmouth community have been contributing to Marlin research by releasing fish with satellite tags which will track their movement over a number of months, so when Eddy and his team hooked up on the big Blue this week, they knew they were onto a good fish.

At 494kg, it was the biggest Blue Marlin ever weighed in Australia and the first Marlin of any species over the old 1000lb mark captured in WA. This is a fish that will cement Exmouth’s reputation as a world-class Marlin fishery.

Marlin are extremely fast growing, with a fish of this size estimated to be about 15 years old. Its exact age will be determined by removing its ear bone, which contains growth rings, similar to those found on trees.

Apart from being an excellent capture, a fish of this size is extremely important to fisheries Science. This fish will provide insights into Blue Marlin age, growth rates, feeding behaviours and population dynamics.

The local community plan to make a fibreglass cast of the fish to use to educate visitors to the region on the excellent fishing experiences the region has to offer.

For more on Game fish science in Exmouth, read our article “Fishing is an Exact Science”. 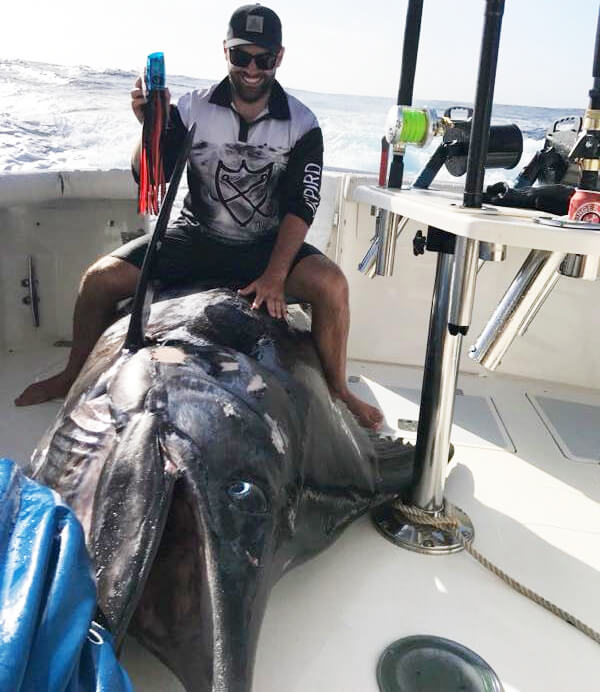