Game fishers from across the State are readying their rods, reels and lures to chase billfish and pelagics during the latest edition of WA’s premier fishing competition — GAMEX. END_OF_DOCUMENT_TOKEN_TO_BE_REPLACED 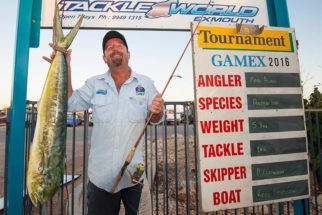 The week long GAMEX competition held by the Exmouth Game Fishing Club’s (EGFC) from March 16-24 brought thousands of visitors once again to the regional town of Exmouth.

As one of the biggest fishing competitions in Australia, GAMEX provides significant benefits back to the local community, including in influx of visitors associated with the event.

The importance of events such as this to local communities can not be underestimated, with previous GAMEX events having injected more than $1 million into the local economy in just over a week that competitors and their families spend in town.

Opportunities for tourism and marketing around fishing events are enormous and can reap huge rewards for small coastal communities.

“We see people hiring a car, filling up at the petrol station, driving out to their accommodation, dining in local restaurants and heading out on the water, stocking up on their bait and tackle supply beforehand,” Recfishwest CEO Dr Andrew Rowland said.

“WA is renowned for quality recreational fishing experiences and with more than 266 fishers in this year’s event, it demonstrates once again the important contribution the EGFC provides to the Exmouth Community.”

Exmouth Tackle Word Owner Jeni Gates said that events such as GAMEX have highlighted the quality of fishing available in Exmouth to an international community.

“Some of the numbers of billfish we have seen caught and released during GAMEX over the past few years combined with the 1084lb blue marlin caught earlier this year has really put Exmouth on the map as a world class billfish destination,” Jeni said.

“Over the last 12 months we’ve seen an influx of anglers from all around the world. Earlier this year we had multiple families visit form South East Asia who all came with the intent of tangling with a big Marlin.” 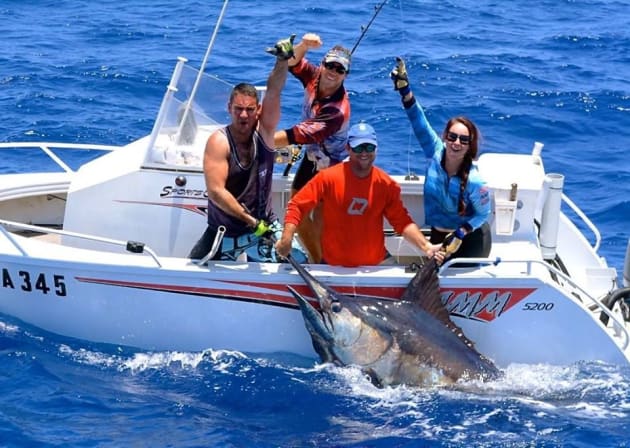 GAMEX also highlights just how important fishing is to the social fabric of small coastal communities.

Fishing continues to provide significant health and wellbeing benefits in many small coastal communities in WA, and fishing events such as GAMEX continue to promote the quality of fishing experiences available on our doorstep.

Recfishwest looks forward to being a part of GAMEX 2019 and congratulates the EGFC and Exmouth community on pulling together such a beneficial event. 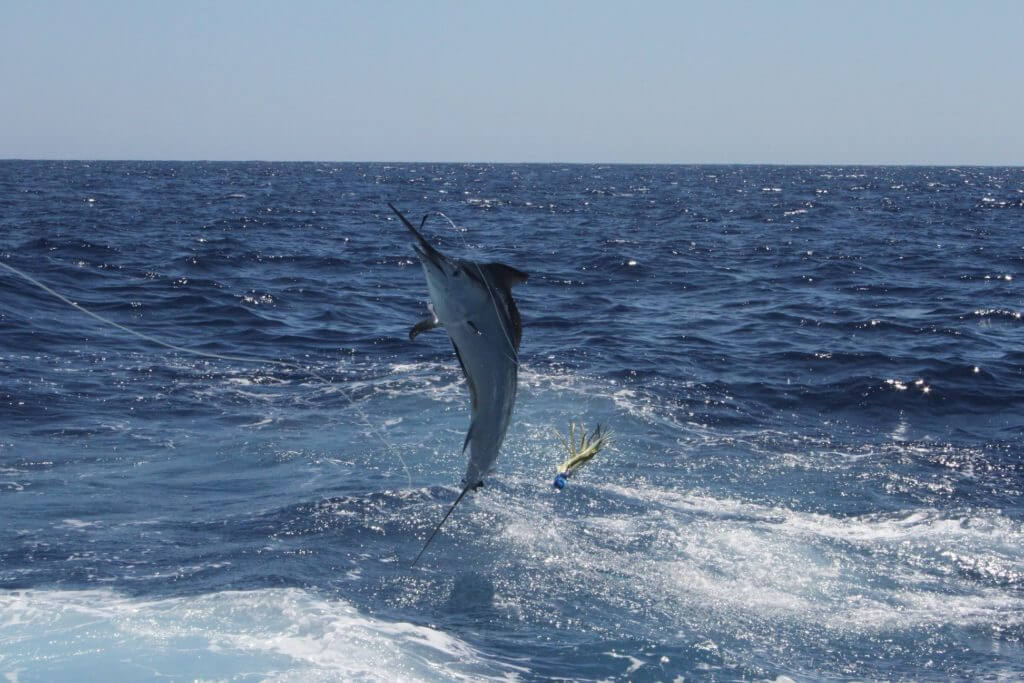 Regional fishing hotspots are set to get a boost in 2018 as fish aggregating devices (FADs) are deployed in WA regional centres including Exmouth, Geraldton and Albany.

With funding from the Recreational Fishing Initiatives Fund, local communities are working with Recfishwest to deliver FADs. This will diversify fishing opportunities for locals and visiting fishers alike. FADs will provide fishers an opportunity to catch fast growing, highly migratory pelagic species.

Designed to aggregate fish such as Mahi Mahi, Tuna and Billfish, the regional FAD project will see the first FAD installed in 2018. FADs have been used successfully throughout Australia, including off the coast of Perth, where the Perth Game Fishing Club deploys FADs in November each year.

These are accessed regularly by metropolitan fishers and provide high quality fishing for Mahi Mahi, Tuna, Wahoo and Marlin.

Some of these FAD’s will be in reach for regular trailer boat fishers with boats of less than 5m to enable them the opportunity to catch highly sought after sportfish.

Recfishwest looks forward to implementing this program and will keep subscribers up to date with progress reported through our Broad Cast and social media platforms.

This project was made possible by the Recreational Fishing Initiatives Fund.

World-leading Australian marine biologist Dr Julian Pepperell will be a special guest at the popular GAMEX fishing tournament in Exmouth this month.

GAMEX organisers will be hoping for better luck this year after a looming cyclone forced the cancellation of last year’s event. Dr Pepperell will be at the competition as part of his project to use local fishing tournaments to monitor and research important recreational game fishing species.

This project, supported by Recfishwest and the Department of Fisheries, is funded by your licence money through the Recreational Fishing Initiatives Fund (RFIF).

His program encourages fishing clubs and recreational fishers to facilitate and conduct monitoring and biological research on billfish, tuna, sharks, mackerel and other fish captured during major game fishing tournaments throughout WA, as well as during normal game fishing club activities.

In New South Wales game fishing tournaments have facilitated more than 40 research projects from more than 20 scientific organisations. These include a range of projects that assist in the management and sustainability of these species through studies of their biology, ageing, genetics, ecology, reproduction and movement.

The new technique has been adapted by using ‘FTA Cards’ normally used in human forensic work. FTA Cards are used to store DNA after fish slime has been obtained from the fish and wiped on the cards, ready to be mailed to the lab for genetic analyses.

Marlin and sailfish are ideal subjects for this type of research, as they have been shown to handle catch and release fishing well.

Recfishwest believes that Dr Pepperell’s coordinated biological monitoring and sampling program for tournament and club-based fishing in WA will ultimately provide important data for the purposes of better understanding various species, particularly the movement and population genetics of billfish species inhabiting the Indian Ocean about which very little is currently known.

The program is also archiving tissue samples from all fish weighed at the tournaments for potential future use by researchers both locally and globally.

To date, Dr Pepperell has attended three tournaments in WA resulting in 172 fish being sampled and 747 fish being tagged.

This project is another example that demonstrates a high level of commitment by recreational fishers towards assisting research to improve our knowledge of the state’s fish stocks.

One of the biggest fishing competitions in Australia, the Exmouth Game Fishing Club’s (EGFC) annual GAMEX tournament was held in Exmouth from March 13 to March 18.

A total of 226 competitors from all Australian states and as far away as Japan, South Africa and New Zealand fished from 52 boats during the six-day tournament.

Unfortunately, the billfishing was unusually tough by Exmouth’s lofty standards throughout the week, but few would complain after last year’s event had to be cancelled at the last moment due to a looming cyclone.

The final billfish stats for the tournament were down on average, with 426 billfish raised, 285 hooked and 119 tagged. The total tag and release catch comprised of 69 black marlin, 34 blue marlin, 15 sailfish and one striped marlin.

All billfish were tagged and released, with none weighed in this year. Exmouth’s hugely diverse fishing means GAMEX is much more than just a billfish tournament.

Queenfish, mackerel (Spanish, school and shark), tuna (yellowfin, mack, striped and longtail), golden and gold-spot trevally, barracuda, spangled emperor, cobia, dolphin fish, wahoo and more appeared at the weigh station throughout the tournament for the point score and sub-15kg line class sections. There were a couple of line class records broken during GAMEX.

As always, GAMEX was a major community event and there were big crowds at the EGFC each evening. Highlights of the social calendar for the week included the Novotel Ningaloo Long Table Lunch with special guest chef, former Olympian Eamon Sullivan, and the Rockin’ the Boat live music night.

Recfishwest staff were also at the event doing presentations, assisting with research and conducting fishing clinics with over 60 local children, who got amongst longtom, fingermark, queenies and bluebone in the marina.

There were 226 fishers in this year’s event demonstrating once again the important contribution the EGFC provides to the Exmouth community.
Check out the Exmouth Game Fishing Club for more on Gamex, click here.

Renowned marine biologist Dr Julian Pepperell flew to be Broome at the invitation of the Broome Fishing Club to be part of the popular annual event, and also then travelled on to Dampier for the subsequent Dampier Classic.

Tagging and releasing billfish has long been a part of both popular competitions, but this year Dr Pepperell showed participants how to use DNA testing kits to gain valuable scientific data on sailfish and marlin.

Dr Pepperell, based in Queensland, is the man behind the initiative, which is in its second year and sees anglers take a small clip off the dorsal fin of captured fish before releasing them. It is a great way to get more insight into billfish populations, and particularly sailfish.

The DNA data will help shed new light on billfish habits, including fish movements and breeding. This project was made possible by the Recreational Fishing Initiatives Fund and supported by Recfishwest and the WA Department of Fisheries.

Dr Pepperell plans to also show off the new sampling system at future game fishing tournaments around WA. There has already been a dramatic rise in recaptures of tagged sailfish off Broome this year and hopefully, the DNA sampling will help gather further information on this iconic recreational fishing species.